Optical coherence tomography angiography (OCTA) is a new non-invasive imaging technique that employs motion contrast imaging. It generates high-resolution volumetric blood flow information through angiographic images. Fluorescein and indocyanine green angiography are still the gold standard angiographic procedures but OCTA is slowly becoming an essential clinical investigation since the past few years. This article will cover the principle and clinical applications of OCTA.

OCTA compares the decorrelation signal which are the differences in the backscattered OCT signal intensity or amplitude, between sequential OCT b-scans taken precisely at the same cross-section in order to construct a blood flow map. Axial bulk motion from patient movement is eliminated so areas of motion between repeated OCT b-scans strictly represent erythrocyte movement in retinal blood vessels [3-6].

Fluorescein angiography (FA) and indocyanine green angiography (ICGA) both are invasive test that require administration of dye intravenously and imaging up to 10–30 minutes [7-11]. They provide two-dimensional images that allow a wide field view of the dynamic visualization of the blood flow. Therefore, patterns of dye leakage, staining and pooling can be appreciated and are well-documented in the literature [12].

FA is typically used to visualize the retinal vasculature, while ICGA is used to see the choroidal vasculature. While useful, they require injection of an intravenous dye, which is time consuming and can have adverse side effects, like nausea, vomiting, headache, hypotension, hypersensitivity reaction and in rare cases cardiac arrest [13-14]. In addition, dye staining and leakage, blur the boundaries of capillary dropout or neovascularization. These imaging modalities being two-dimensional, are not depth resolved. As a result, segmentation of different ocular layers is not routinely possible with FA or ICGA. Therefore, identification of the axial location of any pathology requires an understanding of patterns of blockage and leakage of the dye [12]. OCTA offers a benefit over the conventional imaging techniques as being non-invasive, less time consuming and segmentation of different layers thus providing the axial location of the pathology. Table 1 shows the difference between FA and OCTA. 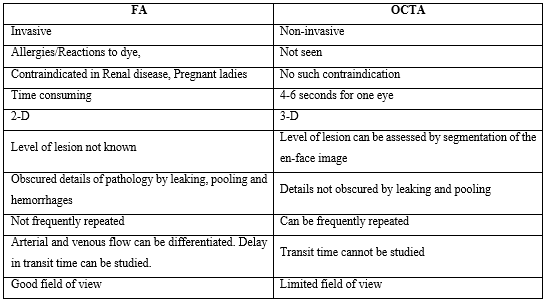 OCT-A technology uses laser light reflectance of the surface of moving red blood cells to accurately depict vessels through different segmented areas of the eye, thus eliminating the need for intravascular dyes [15]. OCT-A is based on the principle of diffractive particle movement detection of the red blood cells, on sequential OCT B-scans performed multiple times at the same retina location, therefore showing the presence of blood vessels [2]. OCT-A requires higher imaging speeds than most currently available devices are able to provide for a sufficiently dense volume.

To construct the image of the retinal microvascularization, each B-scan of the examination area is repeated several times consecutively. The contrast comparisons on consecutive B-scans at the same location reveal some areas with a constant contrast over time and some areas with a contrast change. The temporal change in the contrast in a specific area is attributed to the movement of erythrocytes, which therefore indicates the location of the blood vessels. After correcting for the gross eye movements (by either using motion tracking or software processing), the only differences remaining between OCT images of the same location in the eye would represent blood flow.

Longer wavelengths have a deeper tissue penetrance, with a slightly lower axial resolution. Light is emitted either through a spectral domain OCT (SD-OCT), with a wavelength of near 800 nm or a swept-source OCT (SS-OCT), which utilizes a longer wavelength, close to 1050 nm. OCT-A employs two methods for motion detection which are amplitude decorrelation or phase variance. The former detects differences in amplitude between two different OCT B-scans. Phase variance is related to the emitted light wave properties, and the variation of phase when it intercepts a moving objects. To improve visualization and reduce background noise from normal small eye movements, two averaging methods which are split spectrum amplitude decorrelation technique (SSADA)  and volume averaging were developed [16,17]. These OCT-A algorithms produce an image (3mm2 to 12mm2) that is by standard segmented into four zones: the superficial capillary plexus, the deep capillary plexus, the outer retina and the choriocapillaris.

The most widely available prototype OCTA system is the AngioVue software of the RTVue XR Avanti spectral-domain OCT (SD-OCT) (Optovue, Inc, Fremont, CA). The device uses a SSADA algorithm and obtains volumetric scans of 304 × 304 A-scans at 70,000 A-scans per second in approximately 3.0 seconds. The software offers an option of 2 × 2 mm, 3 × 3 mm, 6 × 6 mm, and 8 × 8 mm OCT angiograms and automated segmentation of these full-thickness retinal scans into the superficial and deep inner retinal vascular plexuses, outer retina, and choriocapillaris. The superficial inner retina contains a projection of the vasculature of the retinal nerve fiber layer (RNFL) and ganglion cell layer (GCL). The deep inner retina segmentation shows a composite of the vascular plexuses at the border of the inner plexiform layer (IPL) and inner nuclear layer (INL) and the border of the INL and outer plexiform layer (OPL) (Figure 1). 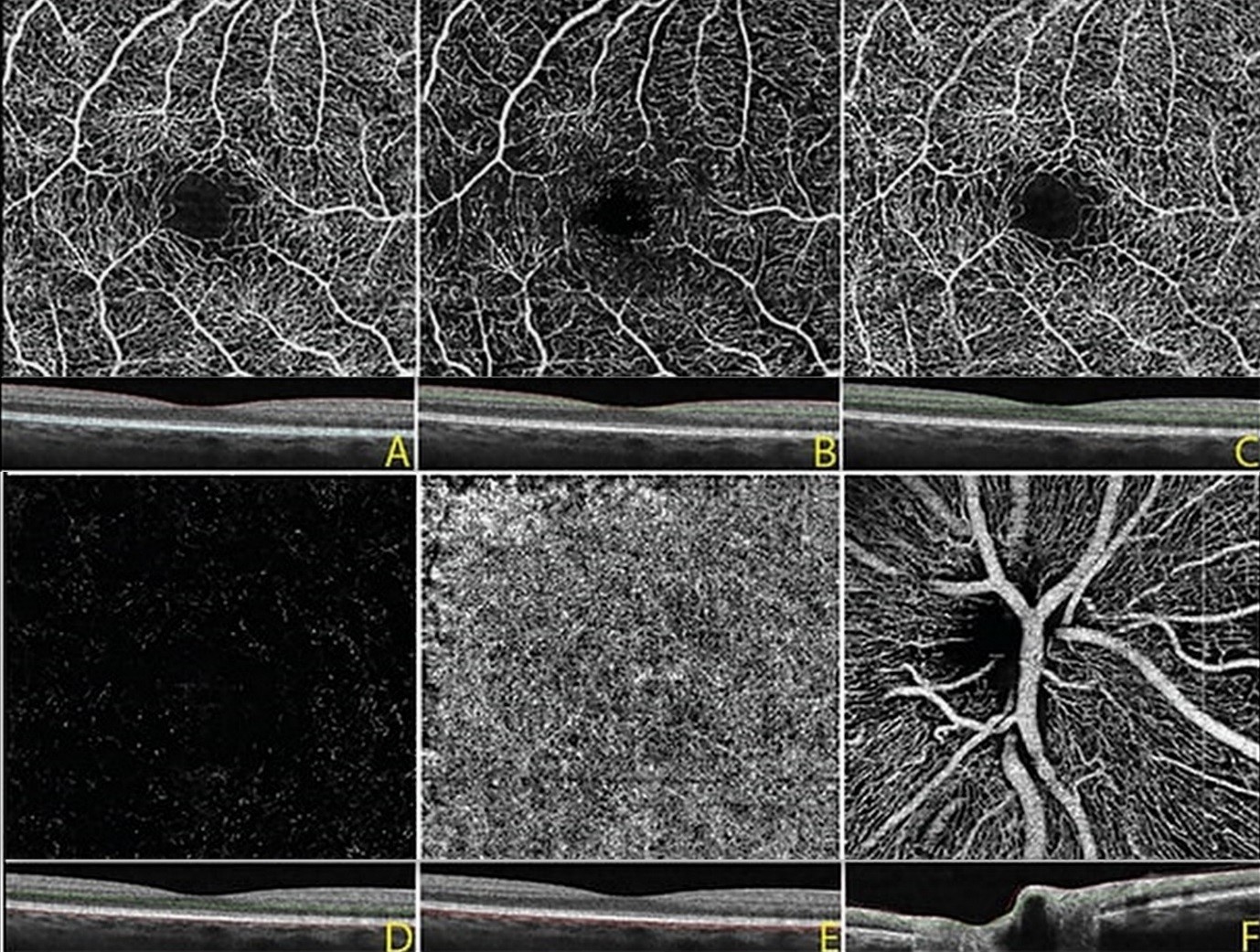 OCTA in Eyes with Pathology

As a non-invasive, safe and fast procedure to assess the chorioretinal microvasculature, OCT-A has increasingly been used in the diagnosis and management of retinal diseases such as diabetic retinopathy, dry and wet age related macular degeneration, vascular occlusions, macular telangiectasia and choroidal neovascular membranes secondary to various pathologies like myopia, central serous chorioretinopathy etc. It is an extraordinary tool for visualizing abnormal choroidal vasculature and it also provides information on the plane in which these choroidal neovascularization (CNV) develop: below retinal pigment epithelium (RPE) (Type 1 CNV), above RPE (Type 2 CNV) and intraretinal (Type 3 CNV). It helps in determining the location of CNV, along with its morphology and response to Anti-Vascular Endothelial Growth Factor (anti-VEGF) therapy. Visualizing a neovascular network does not necessarily mean neovascular activity. Indeed, new vessels may be present but maybe inactive either spontaneously (quiescent occult neovascularization) or after suitable treatment. Thus, the analysis of OCTA should always include an analysis of a more conventional OCT with B-scans. Comparing both examinations allows an assessment of the anatomical location of new vessels and their activity, evidenced by exudative manifestations.

OCTA finds its utility in vascular disorders of retina such as Macular Telangiectasia, Retinal Vascular Occlusion and Diabetic Retinopathy. It delineates the superficial and deep retinal capillary plexus clearly and also can precisely demarcate the vessels surrounding the foveal avascular zone (FAZ), whereas FA only delineates the superficial vascular plexus with blurry FAZ due to perifoveal leakage. Neovascularisation of disc (NVD) and neovascularization elsewhere (NVE) in Diabetic Retinopathy can be detected by viewing the inner retina/optic nerve surface at the most superficial level [2]. Figure 2 shows the OCTA images of different retinal pathologies. 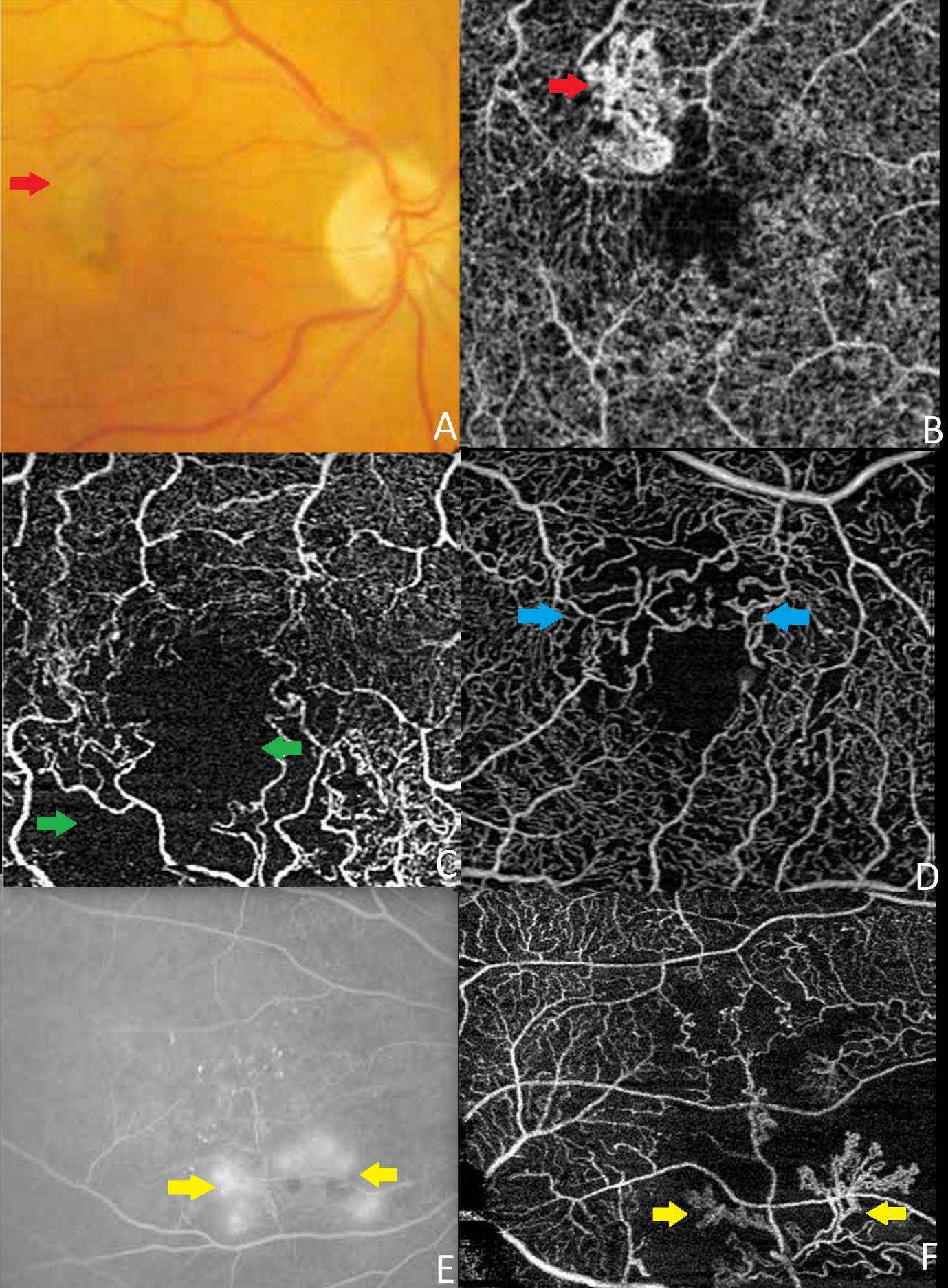 As a light source dependent device, some limitations arise for OCTA technology. Projection artifact is inevitable and is related to the light which traverses the blood vessels and is reflected back by deeper layers (e.g. pigment retinal epithelium), which will appear in the final image with a similar vascular pattern as the overlying vessels [18].

Media opacities can lead to shadowing artifact and signal attenuation [6]. Also, abnormalities in the deeper vessels of the retina may be obscured by superficial blood vessels [17].

OCTA examination is extremely motion-sensitive and requires patient cooperation, which may be difficult in visually impaired [19].

Imaging of the peripheral retina is another limitation of OCTA [19].

Lastly, as OCTA detects "motion", and thus very low amounts of blood flow near the device threshold may be left undetected [21].

OCTA is a new technology that has great potential for use in the clinical setting. Advantages of OCTA over the current gold standard angiographic procedures include being non-invasive, less time consuming, determines exact size and location of the pathology and visualizes both the retinal and choroidal vasculature. Disadvantages of OCTA include inability to view leakage of neovascular membranes, limited field of view, increased potential for artifacts and inability to detect blood flow below the lowest threshold flow. More studies are needed to determine OCTA’s utility in the clinical setting and to determine if this technology may offer a non-invasive option for visualizing the retinal vasculature in detail.