Purpose:The purpose of this analysis is to analyze the cost of complications of bariatric surgery to support the economic evaluation of new surgical technologies based on the example of robotic surgery.

Methods: Patients who underwent robotic bariatric surgery from 2014 to 2015 with complete economic data were included. The itemized and treatment costs were derived using the REKOLE method and stratified using the Clavien-Dindo classification.

New surgical techniques like minimally invasive surgeries, including robotics provide patient benefits such as shorter hospital stay and reduced surgical trauma when compared to the traditional open approach [1]. However, several studies have shown higher costs for robotic surgery when compared with laparoscopy or open surgery [2-4]. Although new technologies are integral to the advancement of surgical care, they often have – sometimes obstructive - incremental costs that are typically associated with significant upfront investments for the initial purchase as well as procedure-related costs, which is also the case for surgical robotics [5, 6].

Since the first published robotic procedures more than two decades ago, the adoption of this technology has increased across surgical specialties with a clear uptake in recent years [7]. However, adoption of robotic surgery still limited to the minority of overall world-wide performed surgical procedures [7]. An important factor that contributes to the limited adoption are the high costs of these systems while the clinical value is still under evaluation as independent high impact factor. As an example, the da Vinci Surgical System – the currently most widely used robotic system -  accrues capital costs ranging from USD 0.5M to 2.5M, the annual service costs range from USD 80K to 190K, and the per procedure instruments and accessories’ costs range from USD 700 to 3,500 [7]. These costs are – depending on the structure of the respective healthcare environment – at the burden of either the healthcare provider, the insurer, the patient, or another third party [5]. If these upfront costs cannot be balanced with other factors, they might become prohibitive, particularly in healthcare systems that utilize a flat-fee reimbursement. In addition, high-quality and industry-independent research supporting clinical superiority of robotics over conventional approaches is missing at present. As such, technologies should not only be evaluated for its safety and efficacy, but also its clinical impact and cost efficiency.

Potential options for reducing the cost of surgeries using expensive equipment include savings on other material and the improvement of surgical quality, resulting in fewer complications. This concept has been demonstrated for robotic gastric bypass surgeries [8]. However, detailed research is complex, and it seems intriguing to understand the cost structures of surgical complications to estimate the impact of clinical improvements on the cost of surgery.

This is a retrospective single center analysis of patients who underwent bariatric surgery between January 2014 and December 2015 at the University Hospital Geneva (Switzerland). Patients with missing economic data were excluded.

Patients were operated with either a fully robotic or hybrid approach using the da Vinci Si or Xi Surgical System (Intuitive Surgical Inc., Sunnyvale, CA, USA). The procedures have been previously described [8-11].

Patients routinely entered the hospital the morning of the procedure and stayed in the intermediate care unit until released from anesthesia to the standard ward. Routine blood testing was performed on day 1 and patients were discharged after successful re-alimentation, pain control with oral medication, and a willingness to return home. If medically necessary, deviations from this path were planned and executed.

Clinical data was derived from our prospective database and individual cases’ charts were reviewed is information was missing. Patients were stratified using the Clavien-Dindo Classification as per the original publication [12]. In case patients underwent additional imaging or other testing outside the previously described clinical pathway, they were classified as a Clavien-Dindo I case, even if imaging or other testing was negative and not strictly indicated (for example ordered by a resident without approval).

The medical cost data included in this study was obtained using the REKOLE method [13]. The REKOLE method is the Swiss national cost accounting system used in hospitals in Switzerland. The REKOLE system was introduced because the Swiss government opted for comparable and transparent hospital costs. Under the REKOLE method, costs are defined as total direct costs of inpatient care and all hospitals adhere to a minimum standard. The REKOLE system was established at the same time as the change of the reimbursement system from the per-diem payment system to the Diagnose Related Groups (DRG) payment system after January 2012, and it has been used since then for academic cost analyses [5]. 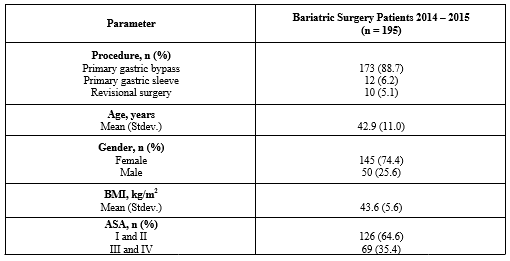 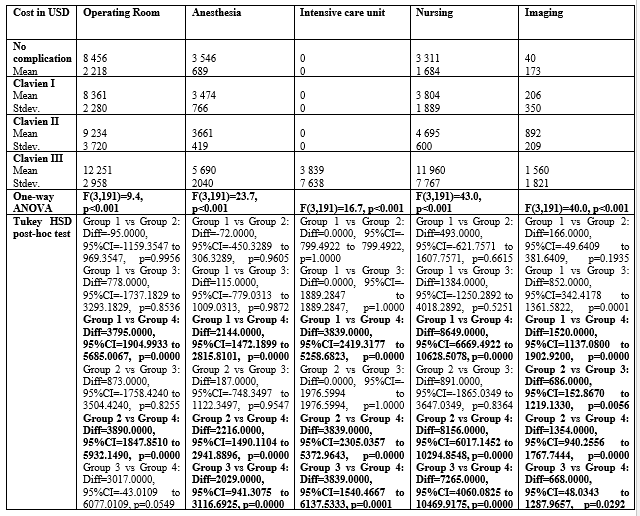 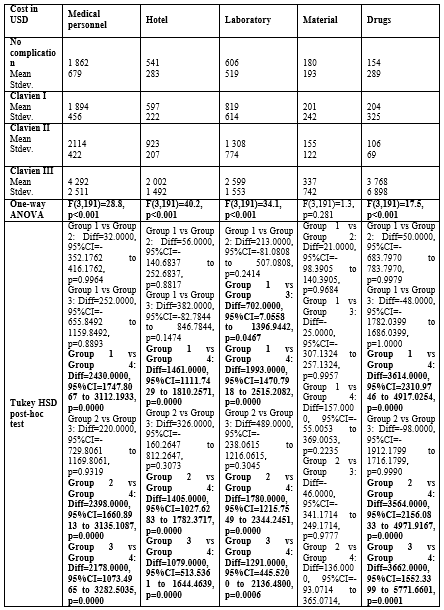 A closer look at the itemized costs of the patients with a Clavien I complication show comparable costs to the cohort without complications. However, we found an increase - although not statistically significant - in imaging and laboratory costs. This observation seems reasonable in the clinical context as a Clavien I complication is a deviation from the standard clinical path not requiring specific treatment. As a matter of fact, most of these patients did not have a real medical problem, bur received additional imaging or laboratory work prescribed by an inexperienced resident. As a teaching institution, residents are primarily responsible for the post-operative patients at night and over weekends and have the freedom to order these tests. Under these circumstances, we often observe a rather generous use sometimes without clear medical indication. However, as per definition these patients need to be classified as a Clavien I and it easily explains increased costs for imaging and laboratory. Another logical observation is the absence of intensive care unit costs for patients with or without a Clavien I and Clavien II complication, but the presence of intensive care unit costs when a re-intervention is needed. All the above mentioned clinically relevant consistencies suggest that this set of cost data is robust and can be used as a solid baseline for economic modeling.

Overall, Clavien I complications within the 18 days of robotic bariatric surgery seem to incur a moderate cost increase of about 3.6%, but the further increase of about 36% and 164% for Clavien II and III complications are rather exponential. It appears evident that any complication requiring treatment is not only devastating for the patient, but also an economic challenge to the healthcare system. As such, there is room for investments to avoid complications and from an economic perspective. As this is a first dataset quantifying the economic impact of complications in bariatric surgery, it can be used as a guide to show the extent of upfront investments that can be afforded to improve outcomes. While these investments might include a wide range of measures including surgeon training, patient preparation, and others, we want to focus on the investment in new surgical technologies. Albeit the absence of high quality and high level of evidence supporting robotics for a widespread application in bariatric surgery, this technology finds an increasing adoption, also driven by the desire to reduce perioperative complications of bariatric surgery. As an example, a few groups have published the positive impact of surgical robotics for gastric bypass surgery regarding procedure times per BMI and a reduction in severe complications such as intestinal leaks [8,14-16]. One study showed a cost reduction with a robotic approach versus laparoscopy for gastric bypass surgery due to a reduction in complications and the use of fewer surgical staplers [8]. This dataset shows that a Clavien III complication costs about USD 33,000. Therefore, a 1% reduction in a postoperative re-intervention rate would save USD 33,000 in 100 patients, and this money can be spent on new surgical technologies such as robotics.

Currently, the da Vinci Surgical System is the most widely used robot and its published costs have been listed above [7]. While these costs may fluctuate depending on the exact surgical approach and the instruments required, this post has been calculated to be USD 1,582.91 in a previous academic publication for gastric bypass surgery in 2011 [8]. Applying this cost structure, it becomes obvious, that a 1% reduction in re-interventions (saving about USD 33,000) would not be sufficient to counterbalance this upfront investment, but a significantly greater reduction of Clavien III complications would be required to financially justify the use of the da Vinci Surgical System. While this is a very simplified model, it outlines the practical applicability of this dataset and the extent of financial considerations that have to be made before widespread clinical adoption.

Still, several shortcomings of this analysis have to be mentioned: first, this dataset is mostly based on economic data and many conclusions require more data breadth and depth. In addition, this analysis includes a limited number of subjects in the healthcare environment of Switzerland. As such, the data might not be applicable in other geographic regions or might not be the same when looking at larger cohorts. Also, this is a retrospective analysis with all commonly known sources of bias. Lastly, the cost of robotic surgery is currently under development: Intuitive Surgical as well as new competitors address the cost issue with alternative models including flat-fee payments and lease options [17, 18]. Still, this is a unique approach for analyzing the bariatric cohort and might be a decent source of reflection for both clinicians and economists.

Complications are important cost drivers and correlate to the Clavien-Dindo classification with an exponential increase for more significant complications. While this is a good rationale to justify higher procedural costs if complications can be avoided, major investments including current surgical robotics might not be offset by a clinically realistic reduction of complications. More systematic research, including the analyses of broader and deeper datasets, is needed to generate more detailed insights into the correlation of perioperative complications and costs.

Dr. Cohen has nothing to disclose.

Dr. Buchs has nothing to disclose.

All procedures performed in studies involving human participants were in accordance with the ethical standards of the institutional and/or national research committee and with the 1964 Helsinki declaration and its later amendments or comparable ethical standards.