The Covid disaster keeps ravaging Planet Earth. It is hardly a turning point for global policy coordination. The economic costs of the corona virus are now arriving in the form of unemployment, lower production and steeply increasing deficits and public debt. How to manage the much needed climate change policyes? The big polluters are governed by leaders who fail to take global warming seriously.

The IEA predicts that the demand for energy and fossil fuels is not going to secret in the coming decade, despite the rapid rate of innovation around the world. The need for energy is growing in developing countries providing more electric power to poor people. It is true that the Covid lockdown has reduced energy supply by some 10.percent  but this is temporary.  Moreover,  some of the  big polluters use the slow process of international negotiations to avoid a radical climate change policy. Transaction costs skyrocket and promises made are reneged upon. Now, global coordination is voluntary except for matters of war and peace and the IPCC has no control authority. International policy making suffers from much rivalry among Big Powers.

The Logic of State Action

The governments of the nations of the world have delayed action on climate change for more than 30 years. The next IPCC conference has n w been postponed until late 2021. What interests do governments pursue in climate change polic making? First, one needs to focus on which states are responsible for the most emissions. Table 1 and Table 2 presents the 10 biggest polluters of CO2 and CH4, respectively, the “Mega Polluters”. 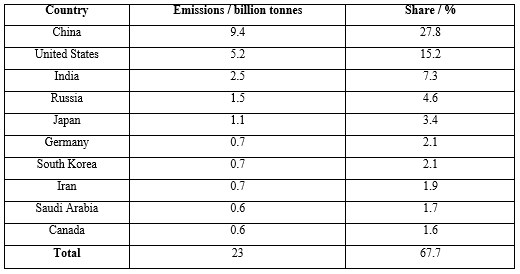 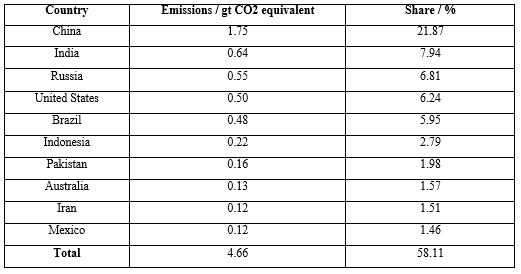 Given that only 10 countries produce more than half of the world’s greenhouse gases, it is a remarkable fact that small countries aiming at zero emissions don’t matter at all.

The Costs of CO2 Reduction

CO2 molecules stay in the atmosphere for very long time periods, so they must be removed very soon. Dreaming about negative carbon emissions would require the construction of enormous numbers of carbon-capture plants, or the replacement of coal-fired electricity by solar energy. Table 3 provides an estimate of how many World-class solar plants each of the leading polluters would have to introduce to replace all of their coal-fired capacity. 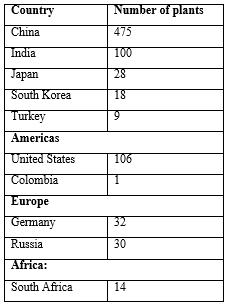 For 30 years the UN has attempted global warming policy. The system of state interaction is much tilted toward national interests and power politics. There is a constant augmentation of military expenses year in and year out among the Big Powers, as if war was imminent. Some of the Big Polluters are engaged in proxy wars. Conflict is typical of the anarchical international interaction [1]. Yet there is also norms and normativity. An international society exists for cooperation on economics and trade, on the use of oceans and atmosphere etc, but there is no consensus on climate change so far. On the contrary, the poor countries want the rich countries to pay for energy transformation.

1) the acknowledgement and protection of states' rights in a reciprocal fashion;

2) the protection of the Planet Earth;

3) the protection of individual persons.

Governments may appeal to the principle of non-interventions in internal affairs to avoid environmental attack. Yet, among the mega-polluters climate change has low priority. Somehow global warming is not very dangerous, at least not in the short term. Moreover,  some of the  big polluters use the slow process of international negotiations to avoid a radical climate change policy. Transaction costs skyrocket and promises made are reneged upon. The IPCC has suffered from the lack of implementing agreements typical of international governance as well as the lukewarm participation of big polluters. Energy is vital for all countries, especially Big Powers even if derived from fossil fuels. Now, global coordination is voluntary except for matters of war and peace and the IPCC has no control competence. International policy making suffers from much rivalry among Big Powers.

The system of states is much tiled toward national interestS and power politics. There is a constand augmentation of military expenses year in and year out among the Big Powers, as if war was immenent. Some of the Big Polluters are engaged in proxy wars. Conflict is typical of the anarchical international interaction [1]. Yet there is also norms and normativity. An international society exts for cooperation on economicS and trade, on the use of oceanS and atmosphere etc. But not climate change so far. On the contrary, the poor countries want the rich countries to pay for energy transformation.

Furthermore, the basic interests of states have been theorized in two contrary approaches: on the one hand, realpolitik versus moralism. The first of these focuses on state power and its maximization in an environment of anarchy, while the second rejects state egoism, especially denouncing war, arguing that states are bound by basic model principles of humanity: pacta sunt servanda, speak the truth, never attack unless attacked, and pay compensation for damages.

The environmental movement would like to add sustainability to these basic norms. Recently, moralism has made advances in public international law, e.g., the International Court of Justice, but realpolitik remains dominant in international relations. Thus, governments can sign declarations for environmental policy purely for tactical reasons without ever implementing them.

When looking at the lists of mega-polluters in the global climate change game with prisoner’s dilemma (PD) theory, one understands why climate policy making has failed. There is no organization or body with the authority to force China, India and the United States to leave the path of fossil fuels. The weakness of moralism in public international law is the lack of enforceability [2]. The EU promising carbon neutrality by 2050 cannot force Germany to stop its huge consumption of coal.

The fear of abrupt climate change is exaggerated, as global warming involves a low but steady temperature increase. It will hit mankind through multiple positive feedback loops, but they all require time before their impact reaches their maximum. So many of the human-experienced consequences of climate change, including possible changes through global ocean currents, the melting of the North Pole, Greenland and Antarctica, will be slow. On the other hand, nobody knows what temperature rises mankind can support. How soon global warming will be lethal for humans depends also on what responses Governments take in the form of reducing coal power in particular, subsidizing electrical vehicles, protecting all kinds of forests and setting up large carbon capture facilities.

Apparently, increases in temperature in the Anthropogenic period have reached a value of 1 degree Celsius, caused by emissions of both CO2 and CH4. Carbon dioxide seem to be more important than CH4 as of now, but that my change in the coming decade. When global warming passes 2 degrees, a number of tipping points will be triggered [3]. Nobody knows how large temperature increase mankind can support in different parts of the world. People will migrate. When administrations really start to reduce their Mount Everest of carbon dioxide emissions, they have a long way to go before carbon neutrality or even carbon negativity can be accomplished, but what to do if methane emissions start increasing rapidly? In reality, international politics makes effective climate change policy making and implementation impossible, which makes the civilisations of the Earth extremely vulnerable.