Aim and objectives: Endometrial Window of Implantation (WOI) is open in the midsecretory phase wherein the  markers of invasion and cell adhesion are manifested  .The primary objective was to find out the predictive value of Endometrial thickness and profiles a prognostic factors for embryo transfers during ART.

Materials and Methods: Endometrial thickness assessment was performed with grey scale ultrasound on the day of transfer just before thawing the embryos in patients undergoing Frozen embryo transfer cycle after endometrial preparation.

Conclusion: The ultrasound morphological and vascular grading of endometrial thickness and vascularity is useful to synchronise Day 5 embryo transfer and window and implantation thereby minimising the loss of good embryos in nonreceptive endometrium.

Endometrial Window of Implantation (WOI) is open in the midsecretory phase wherein the  markers of invasion and cell adhesion are manifested [1] .The human endometrium has a functional layer and basal layer each consisting of stroma and epitheium [2]. In the functional layer, the  epithelium is involved in embryo adhesion and stroma is involved in embryo nurturing [3]. The basal layer epithelium and stroma mainly helps in regeneration(3). Though several advances have been made in genomics, transcriptomics and the various other interactomes like proteomics and lipidomics of endometrial receptivity, the biophysical markers of endometrial thickness and vascularity are economic and feasible in clinical settings.The classical Noye’s histological grading using the LH peak takes into account the seven characteristic histological attributes of mid secretory endometrium that predict its implantability [3].

The deﬁnition of  recetive endometrium that is after 7 days of LH surge and after 5 days of progesterone includes eight histological featues. Epithelial features are the fraction glandular cells in mitosis, the visualisation of nuclear pseudostratification, the presence of secreting basal vacuoles. The stromal features are edema, pseudodecidualization, stromal mitosis and leucocyte infiltration.The assessment of receptive endometrium by ultrasound needs to be assesed as compared to this gold standard of window of implantation [4].

On ultrasound monitering in IVF cycle the endometrial thickness increases in the follicular phase and endometrial character changes from a hypoechoic trilaminar one to a compact hyperechoic look post ovulation [8]. A tri laminar endometrium on the day of ovulation trigger is associated with an increased probability of pregnancy while a hyperechoic character signals failure [9].

In proliferative endometrium there is cellproliferation and cell differentiation and vascularization in response to estrogen. The secretory phase can be classified as early secretory , midseretory and late secretory [10]. The early secretory endometrium shows increased intracellular transport and cell metabolism. The midsecretory endometrium or the “Window of implantation” shows immune system signaling and intracellular communination and cell adhesion [11,12]. The late secretory endometrium is mostly inflammtory mediators and apoptosis The first half of the sectretory phase is charactereised by expression of soluble ligands and their recetors coded by progesterone related genes. The second half of the secretory phase is characterised by vasoconstriction and inflammory response.  Decidual reaction of endometrium happens soon after the closure of window of implantation and this change does not depend on the presence or absence of blastocyst.The activation of innate and humaral immunity characteristic of decidualization are interpretted as 5 line pattern and zonal vascularisation of endometrium [13,14,15]. This study was done to find the role of endometrial patterns and thickness in predicting and optimising ART outcome in Frozen Embryo transfer.

The endometrial thickness and pattern was visulised on the day 18 of previous cycle before Frozen Embryo Transfer cycle(Mock cycle).Endometrium was prepared with estrogen started from day 1 of cycle(2 mg/day from cycle days 1 to 4, 4 mg/day from days 5 to 8, and 6 mg/day from days 9 to 12) . Progesterone was added after endometrium reched a thickness of 8 mm to initiate the secretory changes (40 mg intramuscular administration of progesterone was provided and maintained for the following 5 days).

Low dose Aspirin(75 mg once daily) was administrated for improving endometrial receptivity. Day 3 Embryos were thawed and embryo replacement was done on day 4 after 3 days of progesterone administration.

From day 8 of cycle 150 IU of  HCG was  given intramuscularly to promote endometrial thickness reaches at least 7 mm.HCG has been shown to associted with decidualization process signalling via Vascular Endothelial Growth Factor (VEGF), Leukemia Inhibiting Factor(LIF), Insulin like growth factor like Binding protein 1. It also signals the secretion of Matrix mettaloproteinases from NK cells and secretion of Monocyte Colony Stimulating Factor. HCG also inhibits apoptosis promotes differentiation of stromal cells. 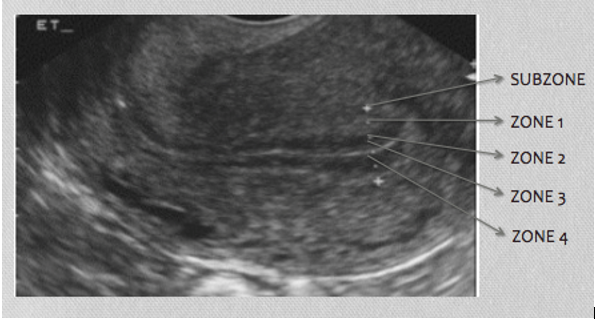 A total of 69 patients with history of thin endometrium who underwant frozen ET after treatment in ARC Fertility centre, Saveetha Medical College over a period for one year were analysed  in this study. The mean age and standard deviation of study population was is 33.26+5.95.Out of 69 patients  there wasclinical pregnancy in 33 patients , miscarriage in 10 patients and ongoing pregnacy in 23 patients. So the implantation rate was 47.83%(33/69),  early miscarriage  rate (pregnancy ending before 12 weeks) was 14.49%(10/69) and the ongoing pregnancy rate was 33.33%(23/69).

Table 1 a: Endometrial Thickness and Ultrasound imaging of fetal pole and cardiac activity.

Table 1 b: Endometrial thickness and ongoing pregnancy till second trimester.

Table 2: Predictive Value Of Endometrial Thickness>6mm For Clinical And Ongoing Pregnancy In Frozen Embryo Transfer Cycles (N=69).(Logistic regression was used to obtain the Odd’s ratio (OR) and 95% CI.Statistical analysis was done using MEDCALC).

On Colour Doppler the vascularity can reach to varius zones as characterised by Applebaum’s [20].  The outermost vascularity zone is subzonal vascularity. Blood vessels reaching the 2 mm thick area surrounding thethe hyperechoic outer layer of the endometrium. Zone 1 is the outermost myometrial endometrial junction . Zone 2 is the hyperechoic outer endometrium. Zone 3 is the inner hypoechoic endometrium. Zone 4 is the endometrial cavity.The reasons for low implantation could be a high impedance blood flow of the radial arteries leading to poor endometrial glandular growth in thin endometrium . Poor angiogenesis subsequent to decreased VEGF secretion can also affect endometrial vascularity.This in turn increases chances of poor placentation and inappropriate vascularization leading to early abortions even if pregnancy is established. Transfer of embryos to an endometrium prepared by HRT seems to yield better results than fresh embryo transfers [21,22]. The other parameters included assessing uterine biophysical profile for implantation are summerised in Table 3 (Table 3).

Other agents that are used to improve endometrial thickness and vascularity are Filgrastin Intrauterine instillation, Vitamin E, L arginine and sildenfil citrate [23]. 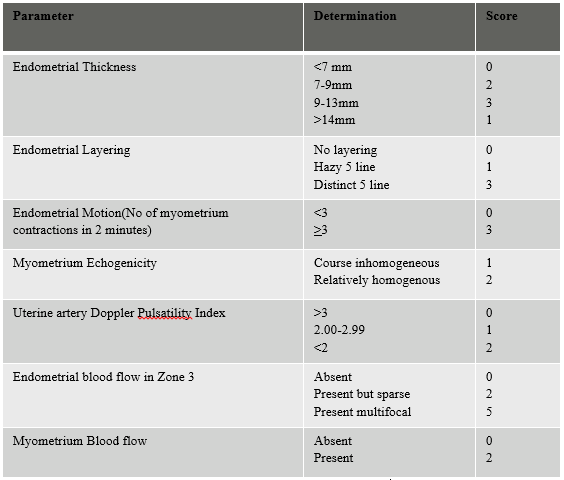 The solution where the glasses are disinfected will have a concentration of 1 to 10, that is, 10ml of Sodium Hypochlorite in 1000ml of Water.

The authors are thankful to ARC group of institutions and Saveetha Institute of Medical and Technical sciences for the providing the infrastructure and support for the conduct of study.