The diagnosis of Systemic Lupus Erythematosus (SLE) requires a positive Anti-Nuclear Antibody (ANA). Additional criteria include antibodies to Extra-Nuclear Antigens (ENAs) and organ manifestations such as glomerulonephritis. “ANA-negative lupus” is a contested entity supported by the presence of antibodies to ENAs such as Ro (SSA) or other typical manifestations, but severe organ involvement is rare in these patients. We present the case of a young woman with ANA-negative lupus with both glomerulonephritis (GN) and Diffuse Alveolar Hemorrhage (DAH). Renal biopsy showed full-house immunostaining classic for SLE. This is the first reported case of ANA-negative lupus with severe involvement of two organ systems.

The presence of an Anti-Nuclear Antibody (ANA) is a critical component in the diagnosis of systemic lupus erythematosus (SLE). The 2019 European League Against Rheumatism (EULAR) / American College of Rheumatology (ACR) classification criteria for SLE newly established a positive ANA titer of 1:80 or greater as an entry criterion [1]. However, the possibility of ANA-negative SLE remains a clinical conundrum. Case reports or series of patients with ANA-negative SLE commonly demonstrate one or two musculoskeletal, cutaneous, or hematologic manifestations, with rare occurrence of glomerulonephritis. Here we present a case of ANA-negative SLE presenting simultaneously with GN and DAH, which to our knowledge has not been previously reported.

A 27-year-old woman presented to our hospital with one month of fevers, night sweats, and cough. She had occasionally noticed blood-streaked sputum.  She reported a history of SLE diagnosed at age 13 in Vietnam with mild fevers, arthralgias, and fatigue but took chloroquine only for a few weeks and could not recall the details of the diagnostic evaluation. She felt well without treatment and had not followed with a rheumatologist in more than fifteen years. In the last several months she had been given short courses of methylprednisolone for joint pains, and in the last 2 weeks had been taking several tablets of ibuprofen daily for her symptoms. Latent tuberculosis was diagnosed 1 year prior based on a positive interferon-gamma release assay but she had only taken isoniazid and pyridoxine for three months before stopping medications. The patient had no surgical history, prior pregnancies, or medication allergies. 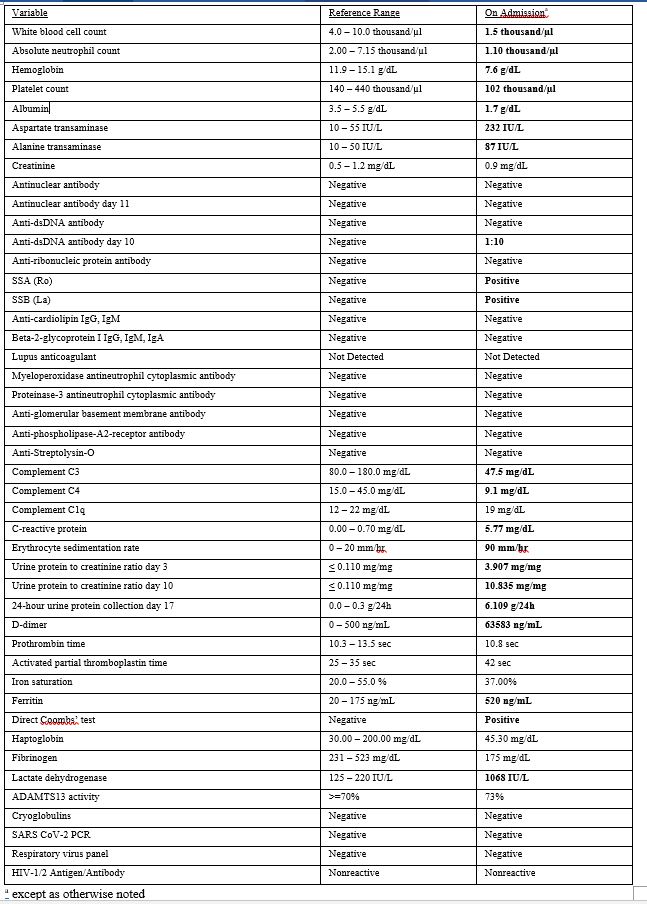 Treatment was initiated with pulse dose steroids (methylprednisolone 1000 mg IV daily for 5 days) and Therapeutic Plasma Exchange (TPE). The patient’s fevers and hemoptysis resolved, her cytopenias stabilized, and she was weaned off oxygen. Specific serologies for SLE were still pending. The UPCR rose to 10.8.

A renal biopsy had initially been deferred due to thrombocytopenia and suspicion of NSAID nephropathy with bland sediment and sub-nephrotic proteinuria. In the absence of a serologic diagnosis and to guide further immunosuppressive therapy, she was scheduled for a left kidney core biopsy. Pathology showed glomerulonephritis with “full-house” immunofluorescence staining for IgM, IgG, IgA, C3, and C1q. A lupus classification would be membranous (Class V) and focal, chronic, segmental glomerulosclerosis (Class III). The patient’s SSA and SSB returned positive and a repeat anti-dsDNA was mildly positive at 1:10 titer. A repeat ANA was still negative.

A diagnosis of ANA-negative SLE was made and hydroxychloroquine was started. The patient was nulliparous and her cytopenia’s persisted, so cyclophosphamide was deferred and she was started on rituximab 325 mg/m2 for four doses for further treatment of her DAH. Her proteinuria improved after rituximab to 0.389 mg per mg of creatinine.

This is a case of a 27-year-old woman with uncorroborated past diagnosis of SLE who presented to our hospital with diffuse alveolar hemorrhage and glomerulonephritis with a negative anti-nuclear antibody.

Because it is rare for patients with severe multi-system organ involvement of SLE to be negative for both ANA and anti-ds DNA and since the prior history of SLE was remote and ambiguous, this case was extensively discussed among the multidisciplinary team. Expedient bronchoscopy revealed DAH but the renal process was uncertain as her urinalysis did not show a typical nephritic sediment and biopsy could not be performed immediately. Ultimately, her Jaccoud’s arthropathy, cytopenias, hypocomplementemia, positive SSA, positive anti-dsDNA, and renal biopsy with full-house immunostaining all supported a diagnosis of SLE.

The importance of ANA in the diagnosis of SLE is illustrated by the 2019 EULAR/ACR classification criteria for SLE which requires presence of ANA titer of 1:80 or greater as the entry criterion [1]. ANA-negative lupus is a contested entity with clinical and/or pathological manifestations of SLE without the presence of an ANA. The incidence of ANA-negative lupus ranges from 1-5% [2-4].

Technical inaccuracy and suboptimal sensitivity of the available tests may explain ANA–negative lupus. ANA positivity for the same sample can vary by testing method (HEp2-IFA vs. solid phase assays) and kits used [5]. There is evidence that ANA that are bound in soluble immune complexes that may not be measurable [6]. Profound loss of antibodies during proteinuria can lead to false-negative ANA tests, which become positive after proteinuria resolves [7,8]. Non-nuclear staining patterns such as cytoplasmic and mitotic cell patterns may also be clinically relevant but not reported as positive ANA [9].

Many reports of ANA-negative lupus nephritis describe patients who present with renal failure and symptoms classically associated with SLE such as malar rash, vasculitis, synovitis, and serositis [8,12-15]. Renal biopsies show glomerulonephritis, often with crescents and full-house pattern by immunofluorescence. One review of ANA-negative lupus nephritis found that 7 of 17 reported cases eventually developed positive antibodies after treatment [16].

Other conditions may mimic ANA-negative lupus, particularly in the kidneys. One group evaluated the clinicopathological diagnoses of 24 patients with “full-house” nephropathy without clinical or serological evidence of SLE and found that 46% were consistent with membranous GN, 21% with IgA nephropathy, 12.5% with membranoproliferative GN, 12.5% with post-infectious GN, and 4% with C1q nephropathy [17]. Two patients eventually developed serological and clinical signs of SLE. Another study reviewed 9 cases of patients who have previously seronegative SLE without extra-articular manifestations and concluded that the biopsy results of all 9 patients were more consistent with C1q nephropathy [18].

In our case, the patient’s renal biopsy suggestive of Class V and Class III lupus nephritis was supported by other clinical and serological evidence of SLE, including Jaccoud’s arthropathy, cytopenias, hypocomplementemia, diffuse alveolar hemorrhage, positive SSA, and positive anti-dsDNA. To the best of our knowledge, this is the first reported case of ANA-negative lupus presenting with both DAH and GN.

“ANA-negative lupus” falls outside of new classification criteria but can present with antibodies to ENAs such as Ro (SSA). Cutaneous, musculoskeletal, or hematologic manifestations have been reported but severe organ system involvement is less common in these patients. This case demonstrates that the ANA can be negative even with involvement of two major organ systems. Careful consideration of other clinical, serologic, and pathologic data can confirm the diagnosis of SLE.

Funding
The author(s) received no specific funding for this work.