High blood pressure is one of the leading causes of early death worldwide, causing nearly 8 million deaths per year [1]. In the latest study in Morocco, the Ministry of Health shows that the prevalence of hypertension was 33.6% [2]. Secondary hypertension, unlike essential hypertension, is less frequent and represents 9.1% of cases [3]. Among the causes of secondary hypertension, renovascular causes alone represent 5% of secondary hypertension [4] and are dominated by atheromatous stenosis, fibromuscular dysplasia and nephropathy. However, there is a rare form of reno-vascular causes, namely intra-renal arteriovenous malformations. This entity is generally found in young subjects and has the peculiarity of the possibility of total reversibility and therefore of healing after correction; unlike essential hypertension where total cure is not an option. In this article, we report the case of a patient admitted for resistant hypertension in whom the etiological assessment was in favour of an arteriovenous intra-sinus, inferior polar malformation of the left kidney.

This is a 37-year-old patient with cardiovascular risk factors (FRCV): hypertension for 5 years initially put on beta-blocker poorly followed then on dual therapy with the combination amlodipine + indapamide; android obesity. Having sleep apnea syndrome as ATCD. Admitted to our training for grade III hypertension resistant to dual therapy in a context of lipothymic discomfort. The clinical examination is unremarkable apart from hypertension. The biological assessment finds hypokalaemia, renal function preserved, proteinuria for 24 hours is normal. Doppler ultrasound of the renal arteries revealed a suspicion of a left intraparenchymal arteriovenous malformation (Figure 1). An additional angio-scanner was performed which suggests an arteriovenous intra-sinus, inferior polar (type I) malformation of the left kidney at high flow rate (Figure 2). The patient underwent embolization with simple post-operative consequences (Figure 3); his blood pressure normalized after the embolization. 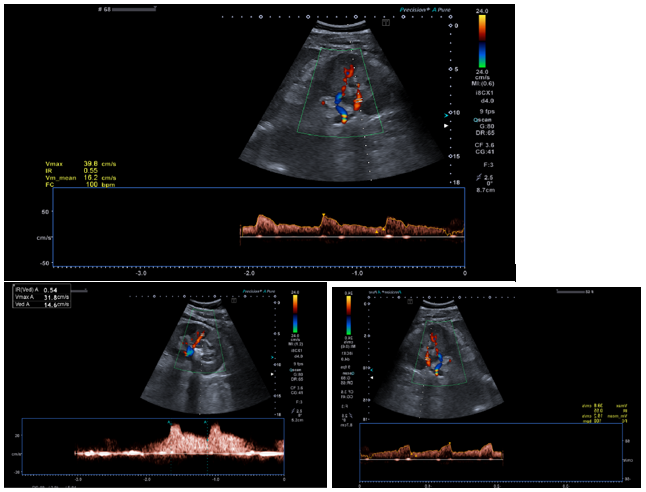 Figure 2: Axial and coronal strokes of the CT scan suggesting an intra-sinus arteriovenous malformation, inferior polar, (type I) of the left kidney at high flow. 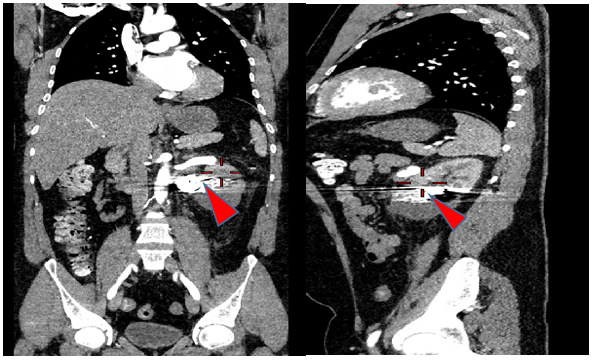 Intrarenal arteriovenous malformations are rare congenital vascular malformations and have an incidence of less than 0.04% [5]. These are fast-flowing, high-flow malformations, made up of arteries and veins in direct communication with each other, which bypass the normal capillary bed. This abnormal network of vessels is called "nidus". The etiology remains unclear. An error in vascular embryogenesis during the first trimester of intrauterine growth, between the 4th and the 6th week of pregnancy, is the dominant hypothesis [6].

40 to 60% of arteriovenous malformations are recognized at birth and 30% will appear during childhood with a peak at puberty [7]. This corroborates the study by N. Grenier, which revealed a clinical case in which a 6-year-old girl presented with isolated hypertension due to an arteriovenous malformation of renal origin [8]. However, for our patient, the diagnosis was late at the age of 37. This could be explained by the fact that arteriovenous malformations can be clinically silent and go unnoticed for many years depending on their size, location and external factors that can cause an increase in volume [9].

Embolization has found its therapeutic place in hypertension secondary to arteriovenous malformations. In fact, our patient, who presented with arterial hypertension resistant to dual therapy, stabilized his blood pressure after embolization; Likewise, N. Grenier, during her study, showed that the blood pressure normalized after embolization in the 6-year-old girl, as well as remote controls (5 years) show an absence of recurrence [8].