Klebsiella pneumoniae liver abscesses have been mostly seen in Asian countries, but recently its incidence in the US and other developed countries is on the rise. It carries high morbidity and mortality if not detected and treated adequately. This case describes the clinical course of a 45- year-old man who was found to have multiple liver abscesses due to Klebsiella pneumoniae and developed septic shock. Early drainage and use of appropriate antibiotics lead to full clinical recovery in the patient.

Most of the cases of Klebsiella pneumoniae Liver Abscess (KLA) are reported in Southeast Asia, but it is an emerging infection globally [1,2]. This infection was first reported in Taiwan in 1980s [3]. Diabetes mellitus, recent antibiotic use, and highly virulent strains of Klebsiella (K1 capsular serotype) predispose to this illness [3,4]. It can lead to invasive liver abscess syndrome and metastatic infection in the form of endophthalamitis, meningitis, and septic pulmonary emboli [5]. Treatment requires parenteral antibiotics for 4–6 weeks along with drainage of the abscesses. It carries high morbidity and mortality due to its metastatic complications if not detected and treated early and adequately.

A 44-year-old man with prior history of renal stones and chronic rhinosinusitis presented to ER with nausea, vomiting, epigastric pain, fever and chills for 4 days. On presentation, his vitals were: BP 104/68mmhg, Heart rate 114 beats/min, Temperature 99.2F, and Respiratory rate of 24/min. He denied contact with any sick person or recent travel. He denied any history of smoking or injection drug use but did admit to drinking 4–5 beers a week for last 2 years. He was originally from Ethiopia, and his last visit there was 3 years prior to his presentation. He was not on any daily prescription medications, but there was a history of completing 4-weeks course of amoxicillin and prednisone for his sinusitis, 1 month prior to admission. Pertinent laboratory work-up revealed Hb 16.2g/dL, WBC 16000, platelets 123000,  creatinine 1.9mg/dL, Aspartate aminotransferase (AST) 329U/L, Alanine aminotransferase (ALT) 444U/L, bilirubin 1.0 mg/dL, and lactic acid of 1.8mmol/L. CT scan of the abdomen with contrast showed multiple Liver abscesses with largest being 11.4 cm in size (Figure 1). There were no evidence of cholecystitis, gall stones, or common bile duct dilatation on CT scan. Urine and blood culture were collected on admission. He was given 2 L bolus of intravenous (IV) fluids and was started on broad spectrum antibiotics (piperacillin-tazobactam and metronidazole). Five hours after admission, the patient became hypotensive with BP of 74/47mmhg which was refractory to intravenous fluids. He was started on norepinephrine infusion and transferred to the ICU. The following day, he underwent CT-guided drainage of the largest abscess; 100 ml of bloody purulent fluid was aspirated, the fluid was sent for cultures, and a percutaneous drain was placed. Blood and urine cultures collected on admission came back negative, but the cultures from abscess grew pansensitive Klebsiella pneumoniae. His antibiotics were tapered to ceftriaxone and metronidazole after the culture results. His blood pressure improved, norepinephrine was discontinued, and patient was transferred out of the ICU. 2-D ECHO showed a normal ejection fraction, and there was no evidence of any valvular abnormalities or vegetations. Serologies for viral hepatitis A, B, and C, and HIV test came back negative. Stool Entamoeba histolytica antigen and serum amoebic antibodies were also negative. Since the patient was having intermittent fever even after the percutaneous drain placement, he underwent repeat CT which showed enlarging liver abscesses. The position of the drain was adjusted by the interventional radiologist, and new samples were collected from the abscess which also grew pansensitive Klebsiella pneumoniae. After adjustment of his drain the fever completely resolved, and he stayed afebrile for more than 48 hours before discharge. Acute kidney injury resolved, and his liver function tests started to trend down. The patient was discharged with the percutaneous drain in place, and arrangements were made to complete 6-weeks course of IV antibiotics with ceftriaxone and metronidazole. Follow-up CT scan after 6 weeks showed resolving abscesses (Figure 2) and significant clinical improvement. Percutaneous drain was removed, and antibiotics were switched to oral levofloxacin to complete additional 3 weeks of treatment. He had complete clinical recovery after finishing the oral antibiotics, and his liver function tests and WBC count also normalized. 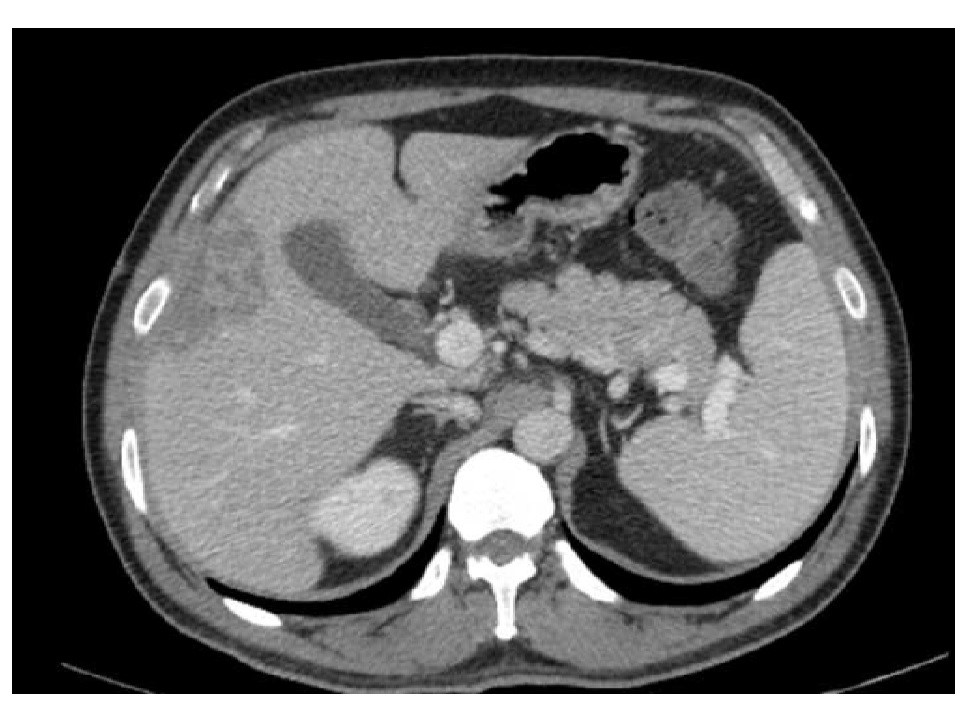 Liver abscess is usually a polymicrobial infection, with Escherichia coli, enterobacteriaceae, anaerobes, and streptococci being the most commonly reported causative organisms [6,7]. However, there has been an increase in the number of cases of liver abscess due to Klebsiella pneumoniae, in both Asian countries and the US [8].This infection was first reported in Taiwan in 1986, and now Klebsiella has become the most common causative agent for liver abscess in Asian countries [9]. The etiology of the infection is unclear, but some studies show that translocation of Klebsiella pneumoniae from the gastrointestinal tract may be the most likely route for the bacteria causing liver abscess [10]. Presence of diabetes or impaired fasting glucose is the most common predisposing factor for developing KLA and metastatic infection. The other risk factors for developing KLA include fatty liver disease, recent use of antibiotics (which was the sole risk factor in our patient), and highly virulent strains of Klebsiella (K1 capsular serotype) [4].

The most common presenting symptom of KLA is fever, which is present in approximately 95% cases. Other signs and symptoms include chills, nausea, vomiting, diarrhea, right upper quadrant pain and tenderness, and jaundice. Laboratory abnormalities include elevation of serum AST, ALT, bilirubin, and alkaline phosphatase. Liver abscesses due to Klebsiella are more likely to be solitary and monomicrobial, but multiple liver abscesses can also occur, as in our patient [11]. Hematogenous spread and metastatic infection can occur in 10–45% patients, particularly in patients with diabetes mellitus [12]. Endophthalmitis is the most common and one of the very serious complication of metastatic infection and can lead to visual impairment. Other metastatic complications include meningitis, brain abscess, septic pulmonary emboli, splenic abscess, psoas abscess, neck abscess, and osteomyelitis.

Ultrasound and CT scan are the tests of choice when liver abscess is suspected based on clinical signs and symptoms and laboratory abnormalities. Final diagnosis is made by cultures from the abscess aspirate. The sample should be sent for gram stain and both aerobic and anaerobic cultures. Blood cultures should also be obtained in all patients with KLA as it can cause bacteremia [13].

Treatment of KLA consists of drainage of the abscess and systemic antibiotics. Percutaneous drainage is the modality of choice for KLA and is preferred over surgical drainage. It includes percutaneous aspiration and percutaneous catheter drainage. Surgical drainage is reserved for patients in which the abscess in not amenable to percutaneous drainage, thick pus is present which cannot be aspirated, patients with multiple large liver abscesses, patients with persistent sepsis and fever even after antibiotics and percutaneous drainage, a multiloculated abscess which cannot be adequately drained percutaneously, an abscess in left lobe, and a ruptured abscess. All patients require systemic antibiotic therapy in addition to the drainage. Empiric antibiotics therapy should have coverage for gram-negative bacteria and anaerobes, which is the empiric coverage for any pyogenic liver abscess. Once the susceptibility results are back, antibiotics should be adjusted accordingly. Third generation cephalosporins are the preferred choice of antibiotics for KLA. Patients with diabetes mellitus have a high likelihood of developing drug resistant K. pneumoniae infection. If there is high suspicion of Extended-Dpectrum Beta-Lactamase (ESBL) producing bacteria, then carbapenems should be given empirically until the culture and susceptibility results are back [14]. Duration of antibiotic therapy is unclear, but most cases require 4–6 weeks of treatment. Intravenous antibiotics can be given for first 2–3 weeks until the patient improves clinically, and the rest of the course can be completed with oral agents. Longer courses may be required in patients with persistent radiographic findings of abscess and in patient requiring subsequent drainage procedures. Treatment should usually be continued until complete or near complete resolution of the abscess on CT.

KLA has an overall good prognosis if diagnosed early and treated adequately, but patients with metastatic infection especially endophthalmitis have a poor prognosis and cause significant morbidity [15].

Even though KLA is most commonly reported in Asian countries, it should also be suspected in the US and other developed countries in patients presenting with clinical and radiographic findings of a liver abscess. Diagnosis is established by culture from the abscess aspirate. Early and adequate treatment with antibiotics and drainage of abscesses should be done to prevent metastatic infections.

All authors have contributed equally to the concept, drafting the article and critical revision for important intellectual content. Final approval of the version is done by all authors. Navroop Nagra is the guarantor of the article.

Conflict of Interest: None of the authors have any conflict of interest to declare

Financial support: None of the authors have received any grants