We describe a case of central nervous system (CNS) coccidioidomycosis. This is the most dangerous form of extrapulmonary disease caused by the fungi Coccidioides spp. Clinical manifestations resemble other chronic fungal infections. Medical treatment is based on antifungal therapy for the most common complication, (hydrocephalus), where a shunt is usually required for decompression. Unfortunately, dissemination to the CNS is usually critical, so patients with untreated CNS coccidioidomycosis tend to have a high mortality a few years after initial diagnosis.

Coccidioidomycosis is an infection caused by soil fungi. This disease is common in some areas of United States and Latin America [1,2]. Although uncommon, infections of the central nervous system (CNS) are among the most pernicious [2]. Meningitis is usually associated with this pathology, causing headache and other symptoms [2,3,4]. Neuroimaging studies usually show meningitis and/ or hydrocephalus [3]. In treatment, oral triazole antifungal drugs have a great impact on the management of this disease [4]. Unfortunately, the most destructive forms of this pathology are chronic, resolution is often incomplete and relapses are common [5].

A 41-year-old man, a resident of Mexico City with a recent history of traveling to the north of the country with type 2 Diabetes Mellitus and Systemic Arterial Hypertension. He attended the hospital for a 3-month history characterized by persistent headache, general attack, daily fever of 38.5° C, confusional state, and tonic-clonic generalized seizures. The physical examination upon admission revealed a sleepy and disoriented patient, in which papilledema, hyperreflexia and meningeal signs stood out.Given the suspicion of chronic meningoencephalitis, a brain computed tomography (CT) was performed, which showed hydrocephalus (Figure 1).

More than half of coccidioides exposures lead to asymptomatic infection [3], while in 40% of patients with symptomatic disease there are various manifestations that can be pulmonary Since the patient presented a rapid and sudden deterioration in consciousness and general neurological status during the evaluation in the emergency department, he underwent immediate surgical intervention for placement of a shunt system, limiting at that time the performance of other studies.The analysis of the cerebrospinal fluid obtained showed lymphocytic pleocytosis with 40 cells, elevated proteins and hypoglycorrhachia; the rapid test for HIV was negative.Despite emergency management, the patient continued with neurological deterioration and progressed to death within a few hours. In the pathological study, a basal subarachnoid exudate was observed (figure 2) and spherules and Coccidioides endospores were shown (figure 3). 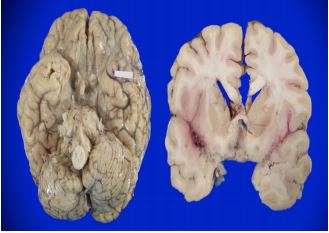 Figure 2: Ventral surface of the brain where the thickened arachnoid is observed and occupied by a thick white-gray material, it is around the arterial polygon and emergence of some cranial nerves (left). Coronal section that passes at the level of the striatum where exudate is observed in Silvio's fissures as well as secondary ischemic lesions in the brain parenchyma (right). 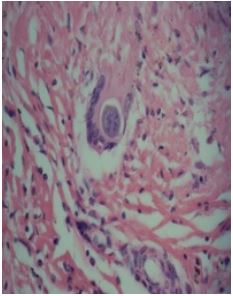 or extrapulmonary: The latter are usually progressive and can involve the skin, bones and / or joints, the CNS and other organs and systems, with meningeal infection being one of the most dangerous forms that occurs in approximately 0.15% - 0.75% of extrapulmonarycoccidioidomycosis cases [4,5]. This occurs as a result of lymphohaematogenous spread from the lungs to the meninges [3]. The epidemiological history of stay in endemic areas and the presence of this symptom together with other compatible clinical characteristics, should indicate the diagnosis, since the prognosis is almost always fatal if not treated promptly [2]. Patients generally present with headache, intracranial hypertension, fever, nuchal rigidity, seizures, and altered mental status [2,4,5]. As in the case we reported, one of the most common findings on cranial computed tomography in CNS coccidiodomycosis is ventricular enlargement [6] and there may be evidence of basilar meningitis, hydrocephalus or cerebral infarcts [3]. The demonstration of a spherule in tissue or a positive culture is a diagnosis [3]. On the other hand, drug therapy for coccidiodomycosis continues to evolve. Antifungals such as fluconazole and itraconazole, in daily doses of 400 mg, have been effective against various forms of coccidiodomycosis including the meningeal one [4,5], while amphotericin B is reserved for severe cases [4]. In addition, hydrocephalus is relatively common with CNS coccidiodomycosis; up to 40% of patients develop this, and the author recommend aggresive management, including daily lumbar punctures and some cases must be managed with ventricular shunting [3, 7]. However, despite aggressive treatment, some patients may die early in the course of the disease. This patient presented to late medical attention with intracranial hypertension due to hydrocephalus secondary to CNS coccidiodomicosys, which was demonstrated in a post-mortem study; which, despite the establishment of emergency treatment, had a fatal outcome, so early diagnosis and treatment are essential to achieve a longer survival and avoid a devastating presentation of the disease.

The authors declare no conflict of interest.

The authors received no specific funding for this work.