Background: Fryns syndrome (FS) is a rare multiple congenital anomaly syndrome. FS is characterized by congentital diaphragmatic hernia, coarse facial features, distal limb abnormalities, among others. The aim of this study is to create awareness about FS and its rare association with omphalocele and bilateral undescended testes.

Case Presentation: We report an hour old male stillborn that has typical facial appearance of FS. His thorax was flattened with widely spaced nipples and there was hypoplasia of the distal fingers/ toes. He also had omphalocele and bilateral undescended testes. There was no diaphragmatic hernia.

Conclusion: Although, no obvious diaphragmatic defect was observed in our patient, other findings were similar to the other typical diagnostic findings of FS. Our patient also had omphalocele and bilateral undescended testes which are not commonly reported.

Fryns syndrome (FS) is a lethal mesoectodermal birth defect. FS is an autosomal recessive genetically determined condition with variable expression and associated with multiple congenital anomalies. The incidence of this syndrome is 0.7 -1 in 10,000 births [1]. In 1979, Fryns et al first described this syndrome [2,3]. The diagnostic criteria include abnormal facies (coarse face, abnormal ear shape, cleft lip, cleft palate, large mouth, microretrognathia, flat nasal bridge); small thorax with widely hypoplastic nipples; distal limb/nail hypoplasia and diaphragmatic hernia with pulmonary hypoplasia [3]. An important diagnostic feature of Frynssyndrome is congenital diaphragmatic hernia which is found in about 80 percent of the cases [4]. Even when diaphragmatic hernia is absent, pulmonary anomalies especially pulmonary hypoplasia is present [4]. The associated anomalies are renal dysplasia, renal cortical cysts, malformations involving brain, cardiovascular system, gastrointestinal system and genitalia [1].In such cases, polyhydramnios and preterm delivery may complicate the pregnancy.Since the first report of FS in 1979, more than 70 cases have been reported. Most of the cases have been associated with early lethal outcome [5]. We present a case of Fryns syndrome that was associated with omphalocele and bilateral undescended testes which are rare findings in Fryns syndrome. A literature search showed that there is no case report of FS in sub-Saharan Africa.

Our patient was an hour old male neonate. The mother was 36 year old. During gestation, the mother did not take any herbal concoction or toxic agent and did not have any febrile illness or rashes in early pregnancy. There was no foul smelling vaginal discharge in pregnancy and she is not a known diabetic or hypertensive. Prenatal ultrasound scan, done at 34 weeks showed omphalocele and polyhydramnios was also detected. The parents were unrelated and the baby was the thirdpregnancy. There are two other living children. The older children are two females. He was born via cesarean section at 38 weeks of gestation with a birth weight of 2.5kg, length of 45 cm. On clinical examination, we detected the typical facial appearance of Fryns syndrome which included microretrognathia, flat nasal bridge, coarse face, and webbed neck. His thorax was flattened with widely spaced nipples and there was hypoplasia of the distal fingers/toes. The nails were also hypoplastic. There was no congenital diaphragmatic hernia. There was omphalocele major but no macroglossia. There was bilateral undescended testis but cleft lip/palatewas noticed.He had rocker bottom feet (Figures 1, 2 and 3). Baby was a stillborn and there was no opportunity for imaging investigations. Parents of the baby declined autopsy of the baby. 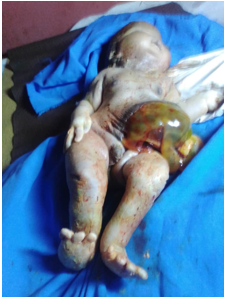 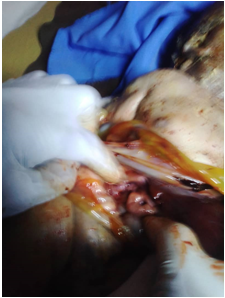 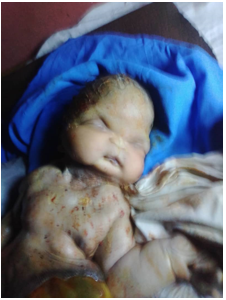 Fryns syndrome (FS) is a rare autosomal recessive congenital anomaly syndrome with an incidence of 0.7 per 10000 births [1]. The 6 diagnostic criteria for FS are as follows: 1) congenital diaphragmatic defect, 2) characteristic facial appearance, 3) distal digital hypoplasia, 4) pulmonary hypoplasia, 5) characteristic associated anomalies like polyhydramnios, brain malformations, renal dysplasia, gastrointestinal system malformations and genital malformations and 6) parental consanguinity. For a diagnosis of Fryns syndrome to be made, at least 3 out of 6 criteria have to be present [6]. Our patient met 4 out of the 6 criteria.

In 2004, Pierson et al reviewed 77 reported patients that had FS. There were abnormal eye findings in 12 patients (15.6%) out of the 77 patients [8].In the past, cloudy cornea was considered a major feature of FS. However, cloudy cornea is currently considered minor diagnostic criteria [9]. There was no eye abnormality in our patient. Multiple midline developmental defects that may be present in FS include gastroschisis, omphalocele, central nervous system defects with left arrhinencephaly and cerebellar hypoplasia, midline cleft of the upper lip, alveolar ridge, maxillary bone and cleft nose with bilateral choanal atresia [10]. Arnold et al published a report of a male fetus with FS with the above additional abnormalities[10]. Omphalocele was present in our patient. Classically, FS is characterized by distal limb hypoplasia. The spectrum of distal limb hypoplasia includes short and broad hands, short digits, short or absent terminal phalanges, hypoplasticor absent nails and clinodactyly [11]. Our patient had short and broad hands and short digits. Van Hove et al reported the high mortality rate associated with FS. He reported that about 36.5% of fetuses die before 36 weeks gestation and 32.2% were born alive after 36 weeks but died within the first few days of life [12]. However, Neville et al reported a 15% chance of survival [13]. The exact cause of FS is not known. FS runs in families and is thought to be genetic because it has features similar to other genetic disorders. However, no specific gene has been identified [14]. There are significant inter and intra-familial phenotypic variations [3].

Fryns syndrome is a rare autosomal recessive disorder with a high rate of stillbirth and early neonatal mortality. Diagnosis of FS can be made prenatally through maternal ultrasound scan.Rare associations such as omphalocele and undescended testes can be found in FS.

The authors declare that there is no conflict of interest.

Consent was obtained from the patient’s parents to publish/present this case.

Ethical approval is not required from my institution.