The chondromyxoid tumor is a primitive benign tumor of cartilaginous differentiation. We report the case of a 10-year-old child presenting with an aggressive form of the tumor that mimics a malignant process, atypical localization at the iliac axis.

The chondromyxoid tumor is a benign benign tumor, presenting 0.5% of primitive tumors. She is generally interested in the metaphysics of the lungs. The objective of our article is to illustrate an aggressive form of this tumor, atypical localization in a child, highlighting the role of the IRM in its taking charge.

Child of 10 years, consulted at the emergency room of the Rabat Children's Hospital for a prolonged and painful tumult of the right iliac fossa, rapidly increasing in volume. The biological balance was normal. The radiography objective showed a mixed lithic and condensing lesion, heterogeneous, of the right iliac artery, inciting the realization of an IRM. The IRM has objectiveed a legal process centered on the right iliac axis (Figure 1), multi-locale, in hyposignal T1, hyerignal heterogeneous T2, reproducing multiple septa stages in hyposignal T2 enhanced by Gadolinium, without restriction in diffusion. It is associated with a compact reaction with respect, without overriding adjacent structures. Absence of infiltration of fat or associated adenopathies. The process was in favor of a more benign origin than a chondrosarcome. The chondromyxoid fibroma was among the evacuated diagnostics, and was histologically confirmed. The surgical excision was indicated. A tumor recurrence was objective by a follow-up IRM after 5 months. It should be noted that tumor recurrence is more voluminous than primitive tumor (Figure 1 d). 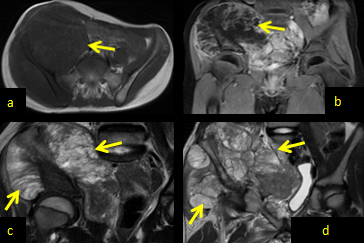 (a) After
(b) Gadolinium injection, and in sequential T2 in sagittal cup before
(c) 5 months after a surgical resection
(d) The images show a tumor process centered on the right, multi-locus iliac axis, in hyposignal T1 (a), enhanced by Gadolinium (b).
The tumor shows a heterogeneous T2 hyersignal, confirming multiple septa steps in hyposignal T2 (c). It is a compact periodic response with regard to, without overheating of adjunct organs.

Chondromyxoid fibrosis generally affects young subjects and manifests itself clinically through pain and tumors. Pathological fractures are common [1]. On standard radiography, at the level of the lungs, one finds an eccentric geographical gap, soufflant the cortical. On the sites where the iliacs are, the tumor is often polycyclic and mixed, associated with a condensation and a bright osseuse. Intra-tumor microcalcifications may be encountered [2]. The IRM is the key exam that can evoke the diagnosis of chondromyxoid fibroma. The myxoid component appears in hyposignal T1, hypersignal T2, and is enhanced by Gadolinium. The IRM also allows the detection of other associated intratumoral components: fibrous, cystic and calcareous [3,4]. Chondromyxoid fibroma is characterized by the absence of intra-medial extension, which allows to differentiate its aggressive form of a chondrosarcoma, the latter being the differential diagnostic principal. In the interest of a meticulous analysis of tumor reports in IRM. Histological confirmation after a biopsy is always indicated [3,4]. The treatment consists of a complete tumor excision with curettage and joint osseux. Note that total resection is not always possible given the frequency of relapses that occur in 25% of cases. The malignant tumor transformation is exceptional [1,2].

The imagery and in particular the IRM play multiple and fundamental roles in taking charge of the chondromyxoid fibroma. The IRM offers a diagnostic orientation, in particular in the case of atypical localization, a precise study of tumor reports guiding surgical treatment, as well as the search for a recurrent postoperative operation.