Neoplasms of unknown primary origin constitute a group of neoplasms in which the primary site cannot be identified after an exhaustive investigation. Sarcomatoid carcinoma of unknown origin is a very rare entity with nonspecific clinical presentation, frequent systemic dissemination at the moment of diagnosis and an aggressive evolution, so the diagnosis represents a challenge. We present the case of a patient who resorted to the emergency service with a neurological deficit as clinical presentation of a disseminated neoplasm. The complementary diagnostic tests performed demonstrated diffuse metastasis in brain, liver, adrenals, bone and muscles and immunohistochemistry examination of a pulmonary nodule revealed the presence of differentiation markers of epithelial lineage consistent with sarcomatoid carcinoma. Initially a pulmonary origin of the tumor was considered more likely, however, despite testing several specific organ markers it was not possible to confirm this hypothesis nor to determine the primary origin of the tumor because the patient died a month after admission due to severe digestive bleeding resulting from gastric metastasis.

Neoplasms of unknown primary origin are a heterogeneous group of tumors in which the primary site cannot be identified after a thorough investigation [1,2]. Sarcomatoid carcinoma of unknown primary neoplasm is a very rare entity, so there are few published data on its clinical presentation, characteristic histopathological findings, approach or treatment [1,3]. The clinical presentation is nonspecific with frequent systemic metastasis at diagnosis and a very aggressive evolution with significant low survival rates [1,4]. The diagnosis is characterized by a great difficulty where a correlation between clinical, histological and imaging data is required and where immunohistochemistry is the gold standard by using specific markers of cell and organ lineage that allow the identification of the primary tumor type and site [2,3]. We present the case of a 63-year-old man with a history of arterial hypertension, diabetes, dyslipidemia and smoking habits. He turned to the emergency service (ER) due to a decrease of strength and hypoesthesia of the left lower limb with a month of evolution and significant worsening on that day which made walking impossible. He also referred right tempoparietal headache for several days. He denied fever, sweating, anorexia, weight loss, vomiting or other complaints. He performed head computed tomography (CT) that revealed multiple expansive lesions with vasogenic edema corresponding to probable secondary tumor lesions (Figure 1). 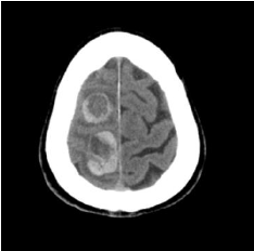 It was followed by a chest, abdominal and pelvic CT scan that showed an irregular shaped nodular lesion in the apical-posterior segment of the left upper lung lobe with 6mm in diameter, 3 micronodules in the anterior segment of the same pulmonary lobe and an adenopathic conglomerate in the pulmonary left hilum with 38X24mm. Seven nodular lesions of secondary nature were also identified distributed over both hepatic lobes as well as in both adrenals. He was admitted to the internal medicine service to study a metastatic neoplasm of unknown primary origin. Analytically he had leucocytosis, neutrophilia and increased C-reactive protein without other major changes. A bronchofibroscopy was performed where an irregular and hypervascularized endobronquial mass was observed in the upper division of the upper lobar bronchus consistent with direct signs of a tumor (Figure 2) and a biopsy was performed. A liver nodule biopsy was also done which proved to be unrepresentative. 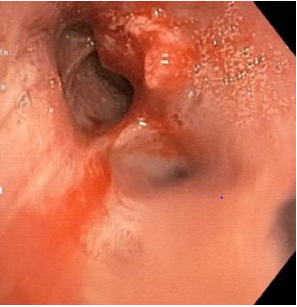 Positron tomography confirmed the previous findings and detected catching lesions in the sinus of the left buttock muscles and diffuse bone metastasis compatible with an high-metabolic neoplastic pathology. He underwent treatment with dexamethasone and painkillers with a slight improvement in pain complaints and neurological deficits. At discharge he presented liver cytolysis and cholestasis, absent at the admission. He was refferred to the outpatient pulmonology consultation to perform a complementary study on the suspicion of a primary pulmonary lesion. The case was discussed in a multidisciplinary consultation group that proposed the repetition of the liver nodule biopsy and treatment with palliative holocranial radiotherapy, that was performed with good tolerance. Subsequently the result of the pulmonary nodule biopsy was available whose immunohistochemical study demonstrated expression of MNF116 neoplastic cells, focal expression of CK7 and GATA3, membrane expression of CD138 and absense of TTF1, Napsin-A, p40, Synaptophysin and SOX10, revealing a carcinoma with an unusual phenotype in lung neoplasms, so it was suggested that the pulmonary nodule was a metastatic lesion. The second liver nodule biopsy was also inconclusive. The patient maintained a follow-up in pulmonology despite histological exams beiing inconclusive and was awainting for a new group consultation to consider systemic treatment with vinorelbine. About a month after admission he went to the ER for epigastric pain, dark vomiting and dark stools. He underwent an upper digestive endoscopy which revealead multiple (5-10) ulcerated lesions with a crater aspect and size between 5-20mm in the gastric mucosa, suggestive of metastatic lesions (Figure 3).

A few hours after the exam he had an episode of abundant hematemesis that conditioned hypovolemic shock that caused his death. Histological examination of gastric lesions made available posteriorly showed involvement of the mucosa by a neoplasm with characteristics overlapping those observed in the histological examination of the pulmonary nodule concluding that it was a sarcomatoid carcinoma.

This is a rare case of a metastatic sarcomatoid carcinoma in a patient that presentead with a clinic neurological deficit. It is a very rare tumor and poorly differentiated carcinoma that derives from epithelial tissues so it can develop in several anatomical sites and histologically is characterized by presenting epithelial and mesenchymal components [1,4,5]. The most common differential diagnosis is sarcoma and differentiation markers of epithelial lineage are used to make this distinction. Specific organ markers are also tested to determine the origin of the tumor [4,6]. Initially the hypothesis of pulmonary origin was considered, namely a lung sarcomatoid carcinoma which is a rare lung cancer that belongs to the group of non-small cell lung carcinomas (NSCLC) correspondind to only 0.1-0.3% of all lung cancers [4-10]. It usually presents as a solitary mass in the upper lobes that develops from central airways cells [4,6,7] but may also present a peripheral location [10]. Several studies have described that affects mostly men with an average of 65 years old and with a high correlation with smoking [4-7,10]. There is no specific presentation and cough and hemoptysis are the most common symptoms [4]. Differential diagnosis with other primary or secondary lung cancers is difficult and still a challenge [5,8,10]. It is a very aggressive tumor associated with low survival rates, lower than other NSCLC [4,5]. Metastasis occur by hematogenous route and the most affected organs are bone, brain and lungs [4,6]. The immunohistochemical study of the pulmonary nodule identified the presence of specific markers of the epithelial lineage such as CK7 (cytokeratin) and MMF116 characteristic of carcinomas. Although several specific organ markers were tested to establish the differential diagnosis between primary and metastatic tumor such as TTF1, Napsin-A, p40, Synaptophysin and SOX10, it was not possible to successfully determine the primary origin of the tumor that remained unknown [1-3,10]. Occurred a very aggressive clinical evolution that culminated in the patient death due to complications resulting from gastric metastatic lesions that is in agreement with literature for this type of tumor [1,5]. Markers of poor prognosis were identified in some previous studies which may indicate an even more aggressive disease at the moment of diagnosis like functional status, number of metastatic sites and increased lactic dehydrogenase, leucocytosis and neutrophilia that are systemic markers of inflammation with a role in the tumorogenesis process [1,5]. Due to their very low incidence and difficulties in diagnosis, these tumors still have a lack of clinical and pathological characterization that makes greater complementarity between different medical specialties an imperative to provide a reduction in the delay of deffining an accurate diagnosis, beucause this situation causes great anxiety and anguish to the patient and his family. Further studies and research are needed and we hope that advances in molecular biology will reduce this time and increase therapeutic options given the poor results obtained with conventional chemotherapy in these type of neoplasms [1,4].