Sickel cell disease (SCD) is the most common endemic disease with the prevalence reaching up to 3% [1,2]. The disease results from point mutation of nuclear bases at the sixth position of the beta-globin chain (substitution of glutamic acid by valine results in hemoglobin SS or glutamic acid by lysine results in hemoglobin SC). These two genotypes have different clinical presentations in which HbSS is more common and associated with a severe systemic disease where Hb SC is associated more with SCD proliferative retinopathy, this is probably due to rising in hematocrit level leading to thrombosis formation and occlusion of retinal precapillary arterioles [1,3]. Sickle cell retinopathy develops in the second decade of life rarely to be seen under the age of 10 years [4,5].

Goldberg categorized the proliferative retinopathy into 5 stages [7], in which the early stages of proliferative retinopathy; peripheral arterial occlusion (stage 1) or peripheral arteriovenous anastomoses between the perfused and nonperfused peripheral retina (stage 2 ) may not need intervention and spontaneous regression due to auto-infarction can be seen without any complications(8), on the other hand the vision loss is common in late stages (stage 3 sea fan ) due to vitreous hemorrhage (stage 4) and tractional retinal detachment with or without hole formation (stage 5) for that it is very important to screen and manage promptly to preserve the current vision and prevent complications(9).

Currently, there is lacking evidence of optimum management [1], the aim is to induce regression of neovascularization (sea fan stage) and prevent the need for surgical interventions prior to complications [7,10].

A 33-year-old female presented to our hospital complaining of floaters in the right eye for one day the other eye asymptomatic, the patient is a case of sickle cell disease no previous history of any ocular or systemic illnesses. A full ophthalmic examination was carried out, Visual acuity was 20/200 OD (Right eye), 20/28 OS (Left eye), intraocular pressure 11 mmHg OD, 12 mmHg OS. For the right eye extraocular muscule motility and anterior segment (sclera, conjunctiva, cornea, iris, and lens) were normal, on posterior segment examination the view was hazy due to mild vitreous hemorrhage, there was partial posterior vitreous detachment and subhyaloid hemorrhage and mild vitreous hemorrhage  and sea fan seen at the temporal retina and slightly elevated with associated retinoschisis, the left eye showed sea fan at the far periphery of temporal side also slightly elevated as the other eye. 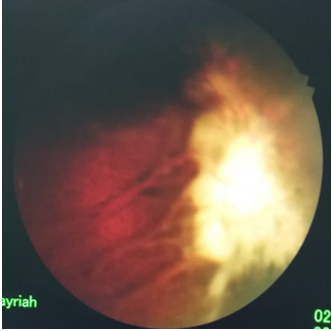 A plan was made to do pars plana vitrectomy, silicon oil injection, and endo-laser for the right eye if the vitreous hemorrhage did not clear or increased after one week of observation. After one week the patient came with much reduction of the vitreous hemorrhage and improvement of the visual acuity to 20/50 so laser scatter photocoagulation was planned for both eyes extending posterior to the sea fan OU for about 2-3 disc diameters and anteriorly involving all the ischemic retina up to near the ora serrata. 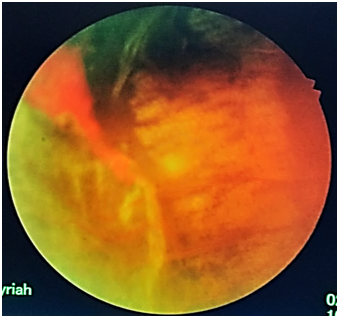 One week Post laser, the visual acuity was 20/50 OD 20/28 OS. In the Follow up two weeks later the patient was satisfied and had no new complaints visual acuity 20/40 OD, 20/28 OS the laser marks darkened and vitreous hemorrhage completely disappeared . 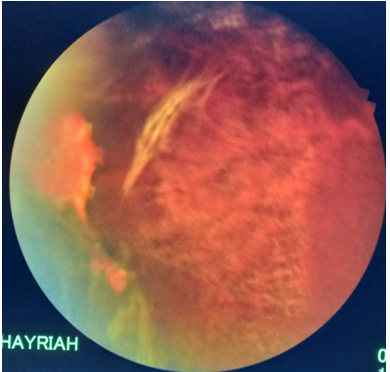 Figure 3: OD 2 weeks after laser treatment for the retina posterior to the ischemic area. Note the epiretinal fibrous proliferation and remnants of preretinal hemorrhage and darkening of the laser marks.

The visual loss in proliferative sickle cell retinopathy (PSR) is mainly due to vitreous hemorrhage and tractional retinal detachment, hence the early detection can prevent such complications [9].

The treatment aims to induce regression of stage 3 PSR avoiding possible complications and blindness [11]. One paper on 341 eyes studying the rate of PSR regression between the control groups (47 weeks) and the laser-treated groups (42 weeks) showed no significant difference. This is possible due to the lack of having specific criteria for doing a proper preventive laser and the regression could happen due to auto-infarction of blood vessels [2]. Some clinicians will choose to observe waiting for auto-infarction since the rate is about 32% (12) others may consider treatment, unfortunately the ideal management in sickle retinopathy is not well defined [1].

Photocoagulation is considered the safest method of treatment of neovascularization just like proliferative diabetic retinopathy [11,13]. The laser is indicated in neovascularization more than  60-degrees,  other proposed indications to start treatment are spontaneous vitreous hemorrhage, rapid progression, single eye patient, bilateral proliferative cases [14], elevated neovascular fronds and in cases where the fellow eye has been lost from proliferative retinopathy [18]. In our case study, we initiated treatment because the patient had bilateral proliferative with spontaneous vitreous and subhyaloid hemorrhage in one eye and elevated fronds bilaterally Fig 1. On the other hand we did not take a rapid decision to perform a vitrectomy to the more advanced right eye because of the known significant intra and post-operative complications that can occur in those patients from surgical intervention as ocular ischemia , recurrent hemorrhage and elevated intraocular pressure [18]. Fortunately enough, a decrease in vitreous hemorrhage and good fundus view was probable within one week which enabled us to go for scatter laser photocoagulation. 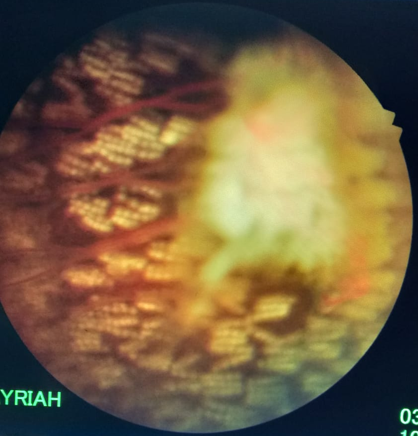 The specific methods treating PSR are scatter laser (360-degree to the periphery or localized around the new vessels) or feeder vessel laser coagulation [16].One study considered the scatter laser  as the preferred method ablating the ischemic retina circumferentially 360-degree [17], another one found that feeder coagulation is comparable to scattered laser  in the prevention of VH but with a potential risk of inducing retinal break and vitreous hemorrhage because of the high power settings used in this modality of treatment [2,18]. For unreliable patients it was postulated  to do scatter laser  360-degree [16], although there is no clear evidence that the outcome of this technique is any better than the other laser techniques or even observation for spontaneous regression [18]. In our case study we did not go for 360 degree treatment because we did not feel that coagulating healthy peripheral retina will be of benefit particularly that other studies did not find any superiority of such a technique. The mechanism of feeder laser coagulation is direct occlusion [13] and in the scattered laser is indirect ablating ischemic retina decreasing vascular endothelial growth factor VEGF [16]. From our point of view we anticipated that ablating the ischemic retina is a more radical treatment than occluding the neovascularization leaving the ischemic retina untreated with the potential of developing new neovascularization because of the unchecked release of the growth factors from the untreated ischemic retina The preferred laser effect is when the disease is detected early at the periphery before reaching the central retina [17], and  the successful treatment is achieved if we avoid the potential complication and morbidity of surgical interventions[11]. 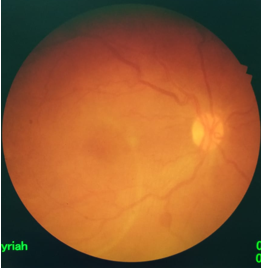 Although this is only a case study, yet with the criteria driven from larger studies, we feel that scatter laser is a safe technique with no complications and effective in the management of this proliferative disease when detected at stage 3 and before entering into the more advanced stages 4 and 5 .