Asparagine Synthetase Deficiency in a Term Newborn: A Case Report in Bogota, Colombia and Literature Review

Asparagine synthetase deficiency (ASNSD) is a rare inborn error of metabolism caused by biallelic mutations in the ASNS gene, which encodes for asparagine synthetase. Clinical presentation implies serious neurological compromise, which includes severe neurodevelopmental delay, congenital microcephaly, spasticity, hyperplexia and intractable seizures. Until today, 30 cases of affected children and 26 mutations in the world have been identified. In this case report, we added another case that was detected in Bogotá, Colombia with typical clinical and imagen characteristics of what is currently described for the disease and a mutation not previously identified in the literature.

Asparagine synthetase deficiency (ASNSD) is a rare autosomal recessive congenital neurometabolic disorder recently identified, and is part of the group of inborn errors of metabolism [1]. Clinically, it is characterized by severe neurological compromise that progresses to a severe encephalopathy. At central nervous system, there is cortical atrophy with reduced cerebral volume, enlarged lateral ventricles, in some cases cerebellar and pontine hypoplasia, simplified gyro pattern, cortical dysgenesis and late myelination [1-3]. The disease is caused by homozygous or heterozygous mutations included in ASNS gene, which is located on chromosome 7q21 and encodes for asparagine synthetase protein. It participates in the synthesis of the amino acid asparagine by transferring ammonia from glutamine and aspartate. Asparagine deficiency in the brain, or accumulation of aspartate / glutamate, results in serious neurological manifestations. However, mechanisms that cause the symptoms are not well known [1-4]. We report a case with typical clinical and imagen characteristics of ASNSD. The diagnosis was confirmed by a complete exome sequencing, which evidenced a biallelic mutation in ASNS gene not previously reported in the literature (4). We will discuss the case together with a review of this entity.

A 38 weeks gestation baby was born, product of a third pregnancy, 42-year-old mother, with no history of consanguinity or other relevant clinical data except both parents came from the same state. Cesarean section was preformed due to non-reactive fetal monitoring with APGAR 6 - 7 - 7 - 8 at birth; weight and height was normal for gestational age, with 31.5 cm head circumference (<-2 SD, according to WHO) and small fontanel. On physical examination he presented microcephaly, isocoric pupils with bilateral punctate myosis and no gaze fixation. Oculo-cephalogyral and cochlear-palpebral reflexes were absent and had no cephalic support. Generalized hypertono with appendicular predominance, spasticity, cogwheel rigidity, hyperreflexia and hyperalgesia before minimal stimuli that immediately improves upon calming, were present. Also had abnormal movements in upper and lower extremities such as jerks with encephalopathic involvement, that sometimes exacerbated, triggered by minimal acoustic or tactile stimuli (hyperplexia), severe swallowing disorder and absence of cough reflex despite stimulation. During resuscitation, poor respiratory effort and low oximetry that did not improved with positive pressure were present.

Asparagine synthetase deficiency (ASNSD) is an autosomal recessive congenital neurometabolic rare disorder, with a prevalence of <1/1000000 worldwide (ORPHA 391376) and predominantly in males [1]. It is presented as a triad of congenital microcephaly, severe developmental delay and axial hypotonia followed by spastic quadriplegia. GeneReviews in its last update 2018 reported 22 cases of ASNSD in 14 unrelated families, with 50% of consanguinity [1-3, 5-13]. 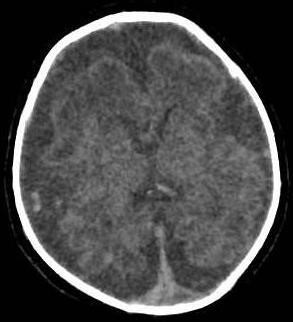 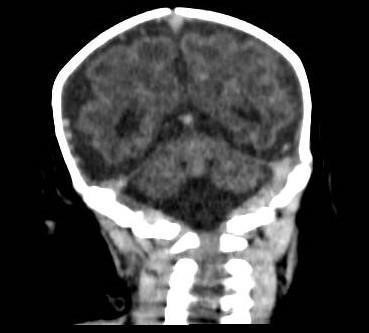 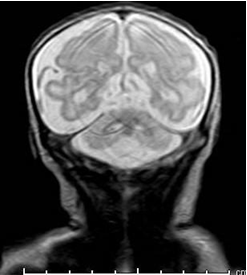 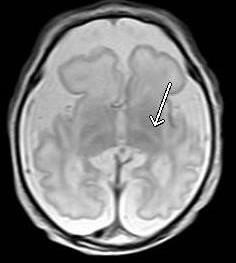 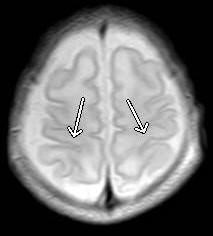 Recently, reported 3 new ASNSD cases, that is, 30 affected children cases and 26 mutations identified until now in Saudi Arabia, United Arab Emirates, Canada, France, Japan and India [12,14]. It is estimated that the frequency of carriers worldwide is 1 in 2049 individuals, higher among Sephardic Jews with 1 in 80, and lower in South Asia with 1 in 3072 [14]. Our case is the first reported in Bogota, Colombia and in Latin America, with a mutation in ASNS not previously identified in the literature.

This disease is part of the group of inborn errors of metabolism, and is caused by homozygous or heterozygous mutations in the ASNS gene, located on chromosome 7q21. ASNS encodes for the protein asparagine synthetase, and when this is deficient, it compromises the formation of asparagine, a non-essential amino acid [1-4]. ASNS participates in the synthesis of the amino acid asparagine, catalyzing the transfer of ammonia from glutamine to aspartic acid [6]. ASNS has two domains, C-terminal where ASNS catalyzes the carboxyl group aspartate side chain activation (ATP-dependent reaction), and N-terminal domain, where glutamine is hydrolyzed to produce glutamate and ammonia. Ammonia is diffused through an intramolecular tunnel of ASNS towards C-terminal domain, where it reacts with β-aspartyl-AMP, and the transfer of ammonia to aspartate is given to form asparagine and glutamate [4,14].

Apparently, the coordination between the two ASNS domains through the intramolecular tunnel is a key point. Mutations located in this tunnel lead to an interruption of this interface connection between the two active sites of the enzyme, and as a result, the loss of ASNS activity [6]. The loss of ASNS function due to a decrease or absence of stabilizing reactions, causes the accumulation of aspartate and glutamate in the brain, which leads to an increase in neuronal excitability, severe neurological compromise with neuronal damage and progressive encephalopathy [3,4,6].

ASNS is expressed in several human tissues, including the brain and being higher in the pancreas [15]. Asparagine is a "non-essential" amino acid, so in the absence of food intake, enough amount of this amino acid can be generated from its glutamine and aspartate precursors, thanks to the action of ASNS [4,6,15]. Asparagine is mobilized by a bidirectional, facilitating and balanced transporter on the endothelial cells luminal surface that form the blood-brain barrier, making its transport easier. It seems that this system is designed to eliminate the amino acid from the brain, and prevent its active accumulation [4,16,17]. In children, the concentration of asparagine in cerebrospinal fluid is only 8 to 13% of plasma level [18]. However, despite its low concentrations, most severe manifestations are in central nervous system, which suggests a very important role of asparagine in the development and functioning of neuronal tissue [3]. Recent studies on cultured fibroblasts obtained from heterozygous parents, did not show any damage with enough asparagine in extracellular environment, while when they were in a medium without asparagine, they diminished their ability to proliferate [7]. This suggests that with low levels of asparagine in the brain, a decrease in ASNS catalytic activity can cause great neurological involvement, and additionally its activity could be crucial for the development of other organs [4]. As ASNS metabolically connects four amino acids: L-aspartate, L-asparagine, L-glutamate and L-glutamine, a balance deregulation of these amino acids, could contribute to the ASNSD pathophysiology [4].

Clinical manifestations are almost exclusively neurological. A triad consisting of congenital microcephaly, severe neurodevelopmental delay and axial hypotonia are described, ending in severe muscular retractions in all limbs, hyperreflexia and finally spastic quadriplegia [6,12]. The age of onset is shortly after birth in most cases, with an average age of onset from the first day of life, until 9 months age [8,12]. Three cases have been reported with presentation after neonatal period [3,15] and only two patients have been diagnosed prenatally with microcephaly detected on ultrasound [1,10].

All affected patients show severe and global neurodevelopmental delay, without acquiring developmental milestones, progressive congenital microcephaly with standard deviations between -2 and -4 [12]. Between 70 and 80% of patients have seizures that usually begin in neonatal period, imitating pyridoxine-dependent epilepsy [8]. Tonic-clinic generalized seizures are the most frequent, but also myoclonic, tonic, complex partial seizures, spasms / shocks / jerks when faced with minimal stimuli known as hyperplexia, and which usually does not respond to anticonvulsant management are seen. It is also common for them to be irritable and restless [1,5,6,9,12].

Non-specific dysmorphic facial features have been described, in approximately 50% of the patients, including brachycephaly, pear-shaped head, inclined forehead, hypertelorism, fleshy ears, prominent nasal tip and micrognathia [12]. Gastrointestinal manifestations are secondary to neurological involvement and are characterized by severe disorders of sucking and swallowing, gastroesophageal reflux, frequent vomiting and constipation [3,10,12]. Ophthalmologically, there is absence of visual gaze and up to 65% of newborns have cortical blindness [12]. Intrauterine growth restriction, sensorineural hearing loss and frequent apneas that require invasive mechanical ventilation, have also been observed, as in our patient [2,3,6,7,9]. Electroencephalogram (EEG) findings are nonspecific, and generally cannot be classified within some type of epilepsy. The most frequent manifestations are multiple independent spike foci, hipsiarritmias, low amplitude diffuse fundus with low to moderate amplitude multifocal epileptiform discharges, with a discontinuous EEG pattern [1,2,7,8,10,12].

Our patient presented the classic triad. EEG showed low-voltage plot, complete absence of background rhythm expected for his age, with occasional and isolated bilateral frontal discharges and potentially but nonspecific epileptiform activity, which did not allow the classification of paroxysmal activity. In imaging studies, brain magnetic resonance in all patients has shown generalized cerebral atrophy associated in 80% of the cases with a simplified rotation pattern. 50-80% of patients have cerebellar, vermis, and corpus callosum stem hypoplasia. They may also have an enlarged ventricular system, thrombosis of the left transverse sinus, cerebral dysgenesis and bilateral caudate atrophy [6,8,9,12]. Our patient had the findings described in most affected children.

Laboratory tests have shown that asparagine level in CSF may be decreased or undetectable, and that plasma asparagine level is low in approximately half of affected newborns. However, it is not as sensitive as asparagine levels in CSF to support the diagnosis [5,10,12]. Renal and hepatic tests function, blood gases, ammonia, plasma lactate, acyl carnitine levels, quantification of organic acids in urine and infectious studies are usually normal [2,12].

The ASNSD diagnosis is established by identifying biallelic pathogenic variants in ASNS [12]. The ASNS gene sequencing detects 100% of the pathogenic variants described, however, in cases where only one variant is detected, it may be advisable to analyze deletions and duplications in this gene. Clinical suspicion of the disease is difficult, that is why there are broader strategies that allow simultaneous analysis of several genes or even the complete genome [12,19]. Exomic sequencing has proven to be a useful and cost effective in our situation [6]. ASNS variant: NM_183356: exon4c: G180C: p.Q60H found in our patient, was classified as VUS (variant of unknown clinical significance), according to ACMG criteria, but reclassified as pathogenic since despite not having functional studies, the analysis with bioinformatic predictors, population frequency, type of inheritance and correlation with patient's clinical findings, suggested it. The exchange of guanine for a cytokine in nucleotide 180 of exon 4, leads to the exchange of a glutamine for a histidine in amino acid 60 of the enzyme. Parents were identified as heterozygous carriers of the mutation.

The newborns treatment with ASNSD should be multidisciplinary and palliative, due to poor prognosis. It includes anticonvulsant management with mainly valproic acid [20], as well as ventilatory support if necessary, physical therapy and family psychological counseling. Treatment with dietary asparagine supplementation has been proposed, however, due to irreversible severe neurological compromise and congenital microcephaly, therapeutic intervention would have few benefits if not implanted prenatally. Nevertheless, due to asparagine transport kinetics across blood-brain barrier, it is not clear whether the supplementation of this amino acid leads to significant increase in its level in the brain, and its impact on the absorption of other amino acids that share the same transporters, resulting in metabolic disturbances worsening the neurological function and other systems [7,17]. A study conducted by Alrifai et al, showed seizures worsening after asparagine supplementation. It is believed that the asparagine excess is metabolized leading to aspartate and glutamate formation, causing neurotoxicity [20]. Our patient required invasive ventilatory support from birth and did not receive anticonvulsant treatment, since clinical and electroencephalographic features were not clear for epileptiform seizures. Likewise, severe encephalopathic involvement quickly led to respiratory failure and death of our newborn.

We present a newborn case with ASNSD, with a biallelic mutation in ASNS not previously reported in the literature. Is the first case described in Bogotá, Colombia and in Latin America. The patient presented classical clinical manifestations and the diagnosis was made by trio sequencing. There is still much to investigate about this entity, as well as prenatal therapeutic options, since, as in many inborn errors of metabolism, there is no specific treatment that corrects the metabolic defect and improves survival or prognosis.