Pericardial Tamponade by Malpositioned Central Venous Catheter: Too Many Errors in a Row!

Still, complications by central venous access procedures occur which may be severe and potentially life-threatening. Here, we present a young female patient in whom a malpositioned central venous catheter with its tip in the right atrium was not adjusted properly and after days led to pericardial tamponade. Unfortunately, despite pericardial drainage she died later due to severe cerebral damage. As suggested by echocardiography, cranial contraction of the right atrium towards the catheter tip may be responsible for the underlying mechanism causing perforation and finally tamponade.

Still, despite increasing use of ultrasound complications by central venous catheters (CVC) in critically ill patients are common.1 In particular, vessel injuries and pericardial damage may occur and lead to potentially lethal complications. Here, we present a young patient with iatrogenic pericardial tamponade who unfortunately died from this severe complication.

A 20-year old female underwent splenectomy due to spherocytosis. Prior to surgery, a triple lumen central venous catheter was placed through the right subclavian vein. After uneventful surgery, the patient was transferred to the intermediate care unit for postoperative monitoring. Here, a chest X-ray (Figure 1) was performed but due to technical issues the result was not available to the doctor in charge. However, the patient made an uneventful recovery and was sent to the normal ward on the following day. 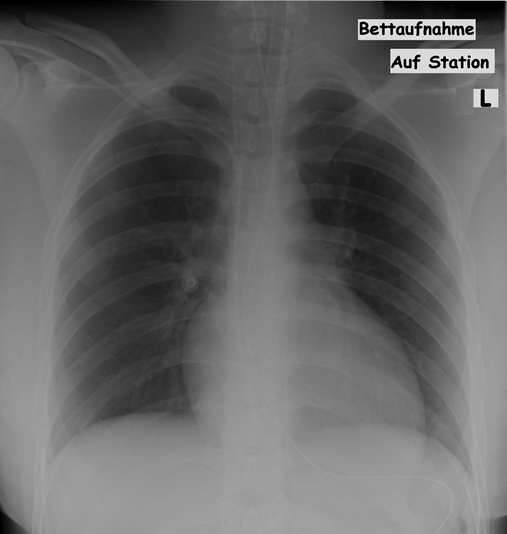 Figure 1. Chest X-ray (anterior-posterior) with the central venous catheter (CVC) in place. The tip of the CVC is in projection to the right atrium (see arrow).

In the evening hours of the first postoperative day, the patient began to feel unwell. Abdominal ultrasound revealed a pericardial effusion and the patient was transferred to the ICU where she arrived in circulatory arrest. Resuscitation was started immediately and a transthoracic echocardiography was performed. Here, a pericardial effusion could be verified. Under ultrasound guidance 150 cc of blood could be aspirated from the pericardial sac resulting in moderately stable hemodynamics.

However, the surgeons insisted on a computed tomography of the abdomen. Since an abdominal bleeding could not be ruled out a laparotomy was performed. While the patient underwent abdominal surgery hemodynamics again deteriorated rapidly.

Accordingly, after surgery the patient was transferred to the coronary angiography suite where pericardial tamponade was drained with a catheter (further 150 cc of blood). The malpositioned CVC was found with its position in the lower right atrium and removed.

For neuro-protection, the patient was treated with hypothermia and finally transferred to the next university medical center for decompressive craniectomy. Unfortunately, the patient died several days later due to futile cerebral dysregulation.

Although central venous catheterization is regarded as one of the mainstays in the clinical management of critically ill patients, it carries a significant risk of procedural and operator-related complications. Data suggest that all inexperienced trainees with a low number of done catheter insertions should be trained and supervised throughout [1].

This tragic case demands extensive discussion. First, as for any medical intervention a clinical indication is mandatory prior to insertion of a CVC. In our case, it could be argued whether it was justified to place a CVC.

Second, the access procedure had been described as uneventful; however, there are no remarks in the files with regard to the procedure itself, to controlling the CVC tip and whether each lumen was inspected for easy venous blood return. As the operator was a doctor in training also supervision failed.

As a result of this negligence the CVC remained in place malpositioned with its tip in the lower right atrium. A chest X-ray had been ordered, however, the doctor in charge had not been informed about the malposition. The awkward chaining unfortunately did not end and accordingly the patient was sent to a normal ward with an insidious critical condition of pericardial tamponade.

Summing up the facts, mandatory indication and consent for placement of the CVC were fulfilled. Regarding the access procedure no notes are available in the files as it is true for the position of the catheter tip. To make things worse, obviously, supervision failed. During the stay on the intermediate care unit a bedside chest X-ray was done, however, the doctor in charge was not aware about the malpositioned CVC. Summarizing it has a lot to commend it rather blunder than mishap.

So far, there are only around 100 cases of CVC associated cardiac tamponade reported in the world literature since 1958. The true incidence is unclear. There are only retrospective case series available which show a wide variation of incidence from 1/10,000 to 1.4% of all procedures [2,3]. Signs and symptoms of cardiac tamponade may occur within a few minutes up to months after catheter insertion. In a significant part of patients, they occur in the first 24 h after the procedure. However, in the vast majority of patients, symptoms may be presented during the first week. The clinical findings are pain and discomfort in the epigastrium and chest, nausea, dyspnea, tachycardia, distended jugular veins, paradoxical pulse, hypotension, electrocardiographic tracing signals with low voltage and enlargement of cardiac area [2,3].

Direct trauma at insertion predisposes to vascular or endocardial damage and perforation. The site of insertion and the position of the catheter tip are important factors [2,3]. The angle between the catheter tip and the wall of a vein or cardiac chamber and the stiffness of the catheter are also considered to be important factors responsible for vessel trauma. When the tip lies at a more perpendicular angle to the wall there is an increased chance of direct trauma and erosion [2,4].

Cardiac tamponade is a medical emergency that can be reversed with timely recognition and appropriate intervention. The clinical diagnosis of cardiac tamponade requires synthesis of a constellation of otherwise nonspecific findings with a clinical situation, e.g. tachycardia and hypotension in the presence of a central line in place. Due to blood in the pericardial space the right atrium gets compressed resulting in diastolic heart failure refractory to inotropes. Based on the underlying pathophysiological characteristics fluids should be administered to stabilize hemodynamics until drainage and corresponding pressure relief of the pericardial sac. Although echocardiography is a central component of diagnosis, alone it is insufficient to establish the physiological diagnosis of hemodynamically significant cardiac tamponade. Cardiac tamponade is primarily a clinical diagnosis with pulsus paradoxus (a decrease in systolic pressure >10 mmHg during inspiration) and diastolic dysfunction. Prompt diagnosis and treatment are essential to improving patient outcome [5].

Why is a malpositioned CVC tip in the lower right atrium prone to perforation and consequently to pericardial tamponade? Wall-thickness of the right atrium is least with 0.2-0.4 mm at the orifice of coronary sinus just opposite to the entrance of the superior vena cava, however, it is a CVC tip position in the lower right atrium which predisposes to perforation and consecutively tamponade in adult patients [3,6]. Endocardial injury is thought to be caused either by movement of the catheter tip, by direct trauma or by movement of the cardiac chambers [2,4]. As suggested by echocardiography, it is obviously the right atrial contraction pushing the right atrial wall almost perpendicular against the malpositioned CVC tip (Figure 2, Video 1). Apart from this mechanism it is of utmost importance to check the position of a CVC tip at the earliest time point in order to prevent from potentially serious consequences. 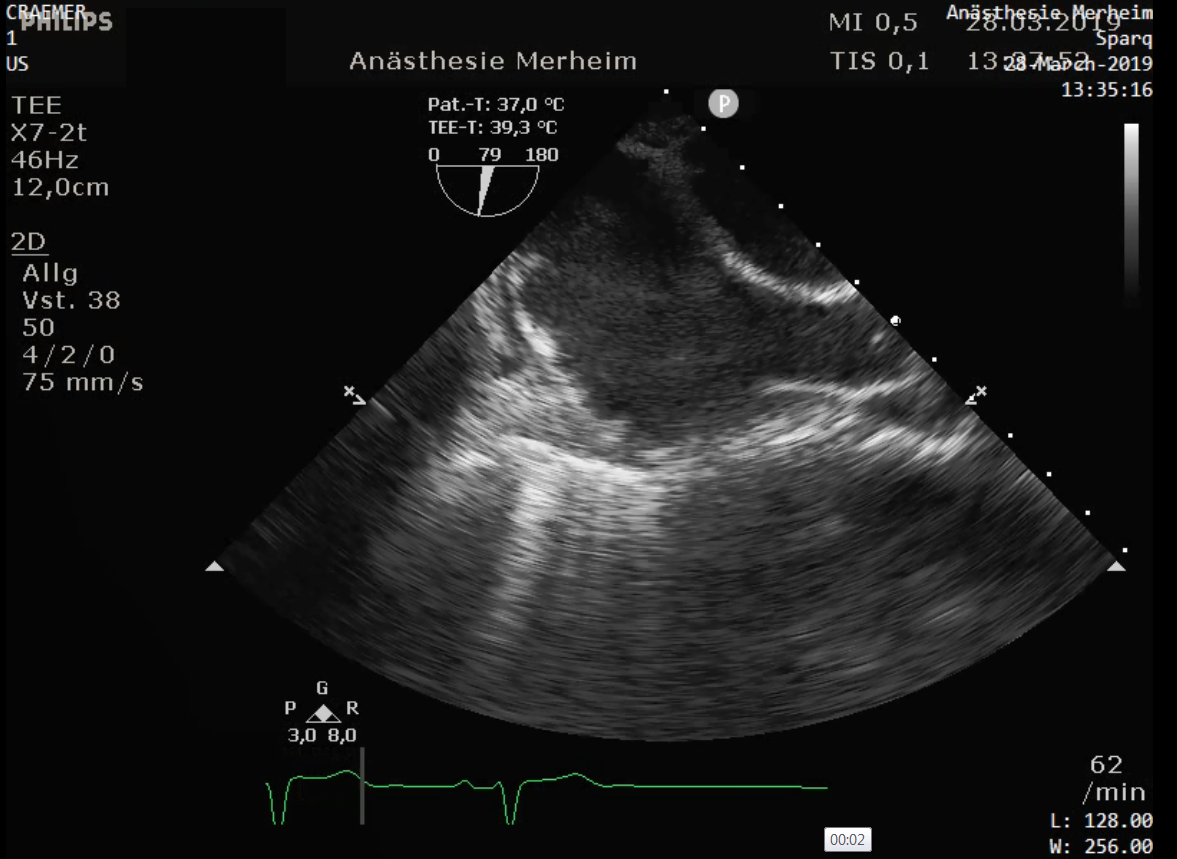 Both authors have no potential competing interests include employment, consultancies, stock ownership, honoraria, paid expert testimony, patent applications/registrations, and grants or other funding.

Both authors have read and approved the manuscript. Both authors have no potential competing interests include employment, consultancies, stock ownership, honoraria, paid expert testimony, patent applications/registrations, and grants or other funding.

Wolfram Schummer: substantial contribution to conception and design, acquisition of data, or analysis and interpretation of data; drafting the article or revising it critically for important intellectual content; final approval of the version to be published; and agreement to be accountable for all aspects of the work thereby ensuring that questions related to the accuracy or integrity of any part of the work are appropriately investigated and resolved.

Samir G. Sakka: substantial contribution to conception and design, acquisition of data, or analysis and interpretation of data; drafting the article or revising it critically for important intellectual content; final approval of the version to be published; and agreement to be accountable for all aspects of the work thereby ensuring that questions related to the accuracy or integrity of any part of the work are appropriately investigated and resolved.

All authors have agreed and are accountable for all aspects of the work thereby ensuring that questions related to the accuracy or integrity of any part of the work is appropriately investigated and resolved.

As the patient has died, we could not obtain consent. We depersonalized the manuscript as we only present age and gender. In our eyes, there is no ethical concern given.