A 35 year old male presented to the emergency room of a tertiary care centre with abdominal pain since 1 month which had a sudden increase in intensity associated with multiple episodes of vomiting and abdominal distension since 5 days. Patient was not a known diabetic and was not on any immunosuppressant drugs. He was in shock and abdominal examination revealed peritonitis. Investigations revealed deranged blood sugar levels and the erect chest X-ray showed gas under the right diaphragm. No viral marker was positive. A previous CECT of the abdomen done 20 days ago was suggestive of ascites, ileal thickening and decreased enhancement of terminal ileum (Figure 1 and 2). Patient was taken up for exploratory laparotomy which revealed 2 litres of fecopurulent peritoneal contamination. A 3*3 cm perforation was identified in jejunum 10 cm distal to duodenojejunal junction with 30 cm of gangrenous ileum with multiple perforations. Resection of the jejunal perforation and anastomosis was done with retrograde duodenostomy and distal feeding jejunostomy considering the contamination. Gangrenous ileal segment was resected and a double barrel ileostomy was formed. Histopathology revealed mucormycosis (Figure 3) when liposomal amphotericin B was started for the patient. Patient could not recover and expired postoperatively. 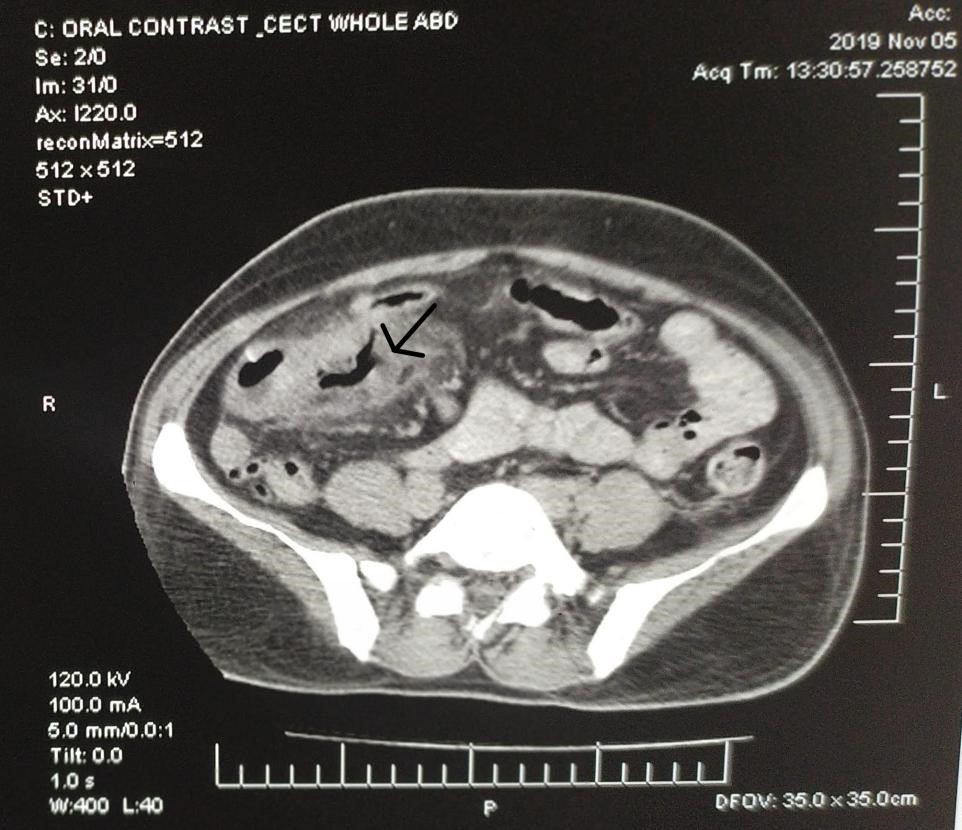 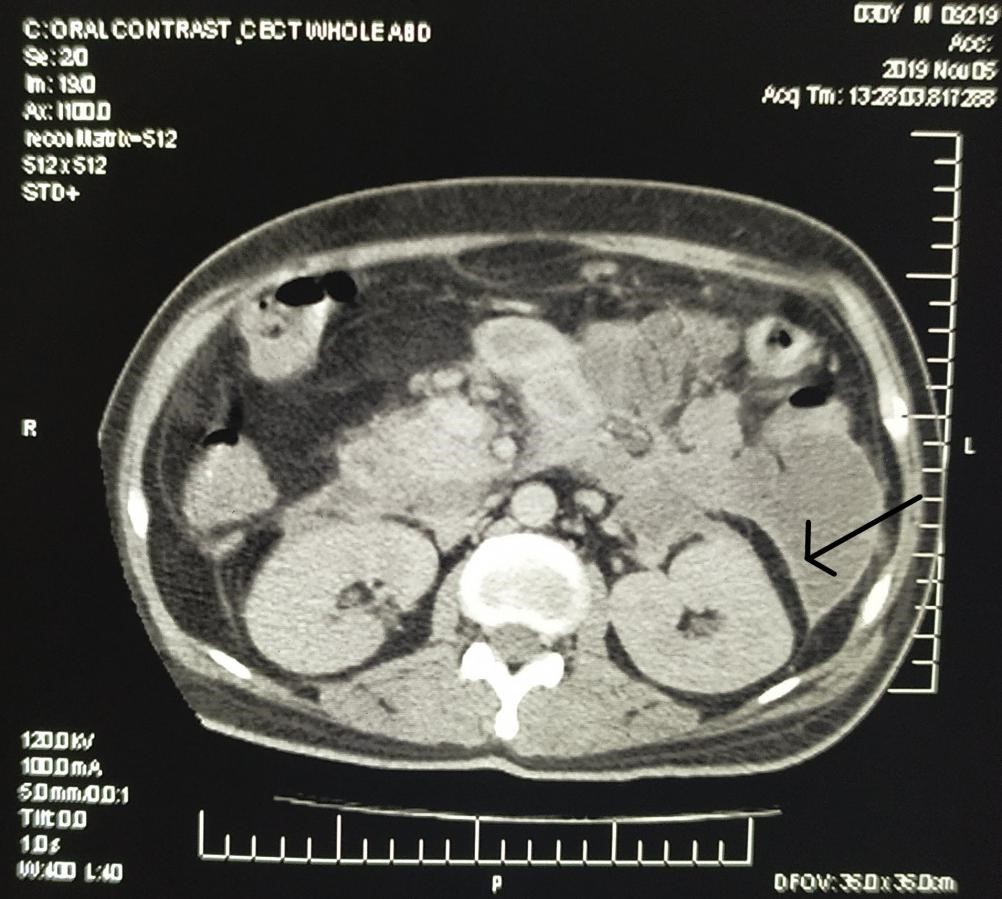 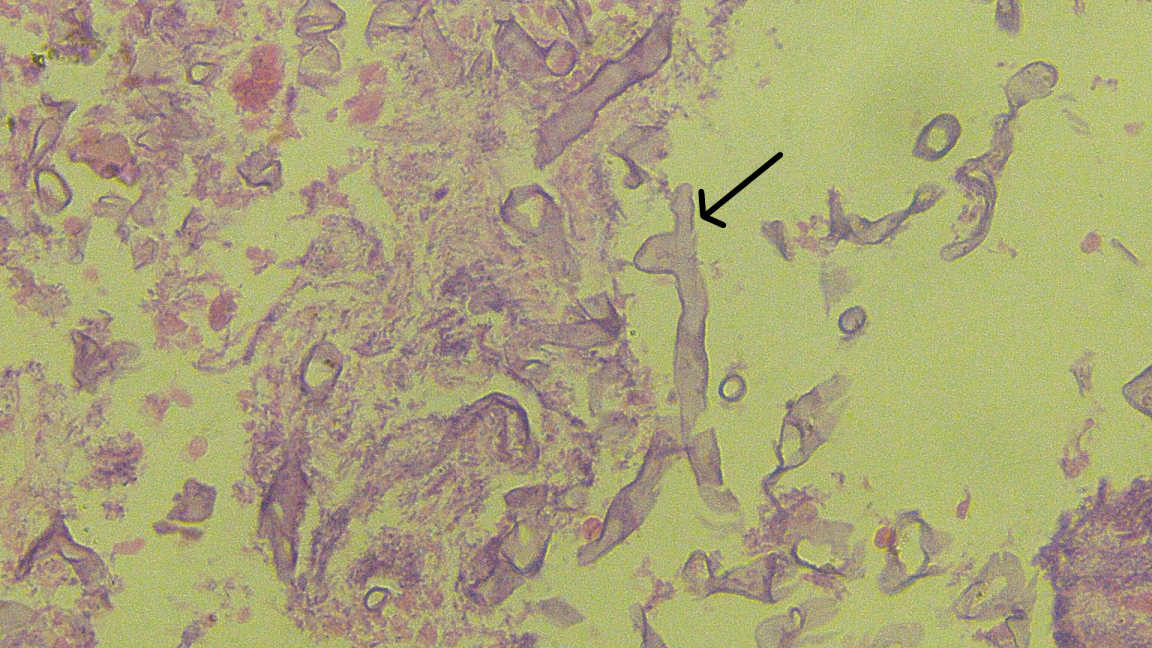 Primary gastrointestinal disease is the least frequent form of presentation for mucormycosis. Early diagnosis and treatment are important considering the aggressive nature of the disease. Colonoscopy and biopsy of the affected segment may help prove the diagnosis. In other cases, biopsy after laparotomy paves the way. Clinical diagnosis of the same is difficult due to nonspecific clinical features with most of the diagnosis being formed after histopathological analysis post-surgery or post-mortem [4]. Radiological features are nonspecific and CECT features may include thickened bowel wall with intense and poor contrast enhancement suggestive of congested and necrotic areas, respectively [5]. A delay of therapy of more than 6 days has been shown to double the mortality rate [6]. The management of GIT mucormycosis involves surgical debridement and antifungal directed therapy (liposomal amphotericin B) [7].  There is a high reported mortality (63.9%) probably due to delay in diagnosis and rapid progression of the disease after angioinvasion [8]. In conclusion, GIT mucormycosis is a rare life threatening disease with high incidence in immunocompromised patients.

I acknowledge the role of Department of pathology, University College of Medical Sciences for providing relevant histopathology photograph.

No funding was received for the publication of this manuscript.

No known conflict of interests.