The Development of Morphea Following a Motor Vehicle Collision

Acute development of bruising in a 47-year-old female following a traumatic motor vehicle collision. Initially, upon evaluation, the traumatic discoloration of the skin was attributed to bruising overlying the shoulder. Over time, the skin changes continue to progress without resolution. Further evaluation by a dermatologist identified the abnormality as a rare skin disorder known as Morphea. As a result of the accident this led to the imbalance between collagen production and destruction causing pigment changes. Patient was initially treated unsuccessfully with Clobetasol with transition to methotrexate. Morphea is a rare autoimmune skin disorder leading to fibrosis within the skin and soft tissue that is most commonly seen in females.

Morphea is a rare disorder that affects the skin and soft tissue leading to fibrosis. The cause is unknown but may be related to an imbalance between collagen production and destruction related to autoimmune dysfunction [1,2]. Females are more likely to be affected than males with a ratio of 2.4-5.0 to 1 with an incidence between 3.4-27 cases per 1,000,000. The incidence appears to be bimodal with peaks between 7-11 years of age and 44-47 years in the adult population [2]. Autoimmunity has been shown to contribute due to the presence of auto antibodies in a percentage of the patients evaluated. Environmental factors such as friction, long term pressure, and mechanical factors have been shown to contribute to Morphea in 13-16% of the patients. Uncommon causes include radiation therapy which may lead to the secretion of Th2 cytokines, or interleukin 4 and 5 causing TGF- β mediated fibrogenesis, or radiation-induced morphea [2].

47-year-old female with complaints of “bruising” involving her left shoulder which started approximately one year prior to establishing care. Patient was involved in a minor motor vehicle collision prior to the onset of bruising. Patient was evaluated in the emergency room and released the same day. Shortly after the accident, patient noticed skin changes involving the left posterior arm (Figure 1) which she initially thought was bruising from the car accident. Patient denied any tenderness to palpation over the area with full range of motion and strength. Unfortunately, the hyper-pigmentation did not improve, and in fact, progressed to involve the left shoulder, proximal anterior arm, left side anterior chest, and back (Figure 2). Patient did seek care with her PCP at the time and was advised it was related to her accident and would resolve with time. 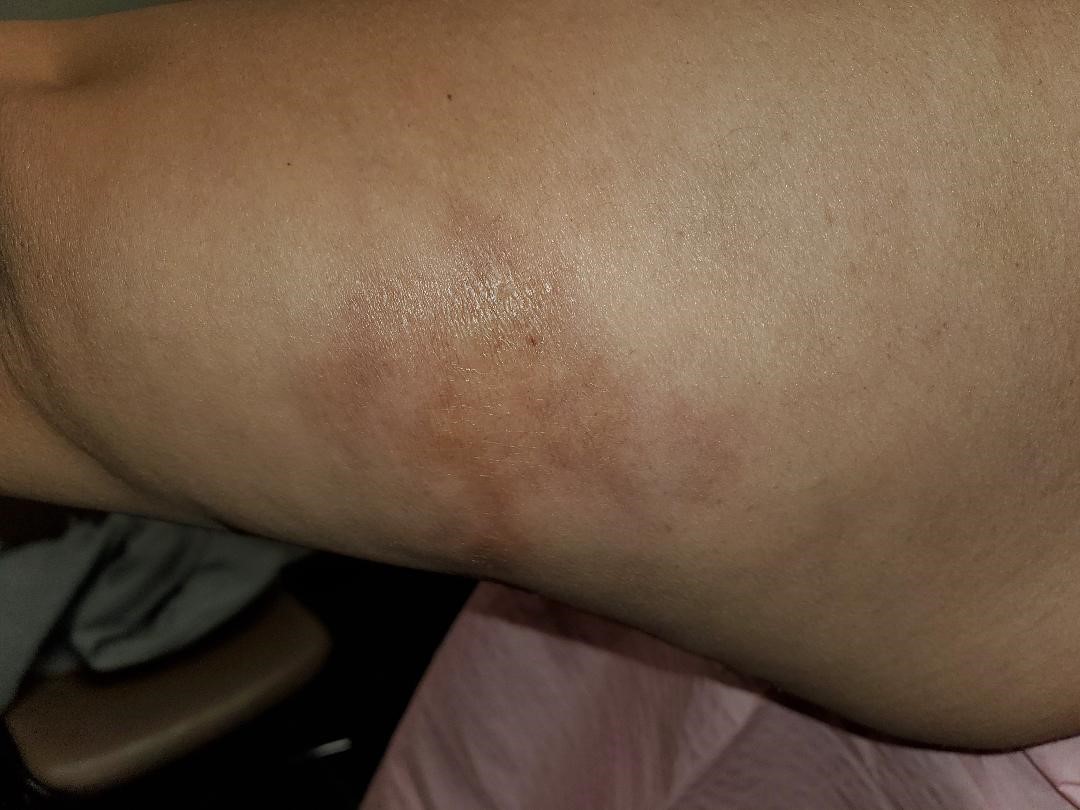 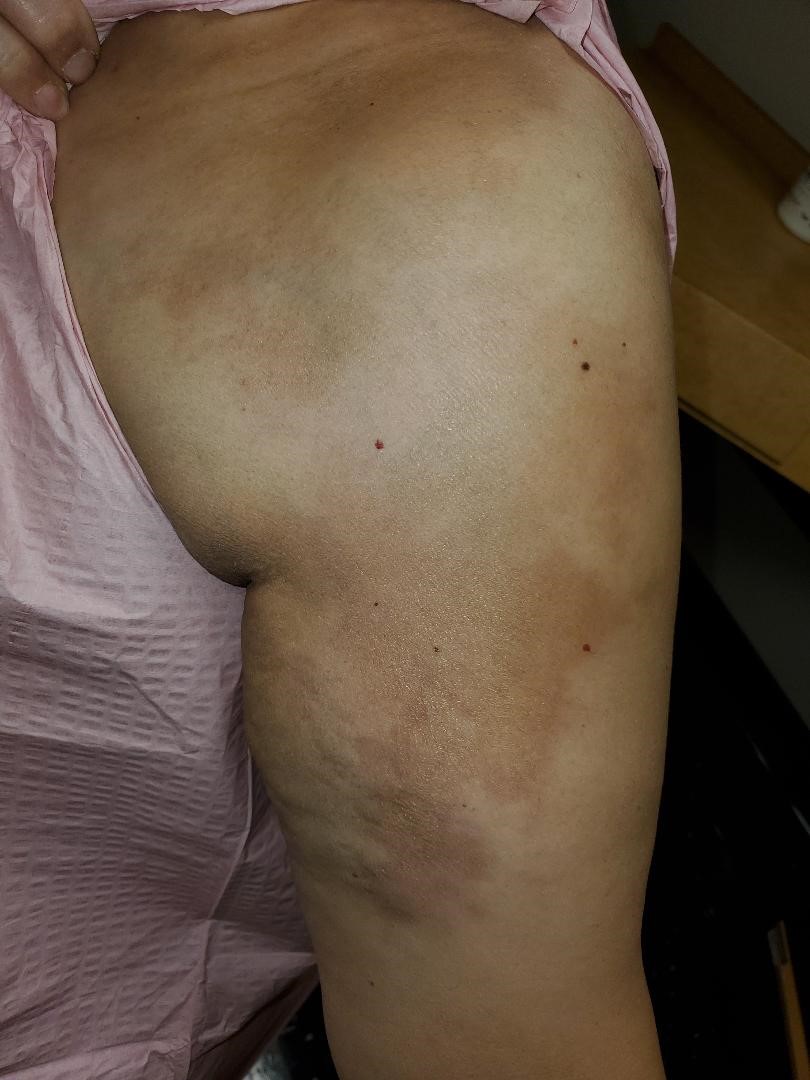 Figure 2: Progression of the Morphea to include the anterior arm, shoulder, and chest.

Patient decided to establish care with a new PCP approximately one year after the accident due to hyper-pigmentation not resolving. Patient underwent a shoulder x-ray, CBC with diff, CMP, TSH with free T4, Vitamin D, and coagulation studies. The total Vitamin D level was minimally elevated at 82 pg/l, but the remaining labs and imaging were unremarkable.  An MRI was subsequently ordered and identified a non-specific superior shoulder subcutaneous soft tissue edema extending over the fascial plane of the lateral deltoid without a drainable fluid collection. Also, a mild to moderate rotator cuff tendinosis was present without a discrete tear. Evaluation was completed by dermatology and was found to have bound-down hyper pigmented plaques most consistent with Morphea. Clobetasol 0.05% every 12 hours for two weeks was started, but after one month of treatment there was no improvement. At that time, patient was also diagnosed with Alopecia and subsequently put on Methotrexate 15mg weekly for the Morphea, and Spironolactone to counter the effects of Methotrexate-associated Alopecia.

Morphea, also known as localized scleroderma, is a rare fibrosing disorder characterized by round or oval irregular and linear shaped plaques. Histopathology demonstrates numerous lymphocytes and histiocytes located in the dermis scattered amongst collagen bundles. As the disease progresses, the inflammatory cells are replaced with hyalinized connective tissue. Sebaceous glands and hair follicles are absent, but sweat glands are present in reduced numbers amongst a bed of collagen [1,4].

The most widely used classification system is through Mayo Clinic. Morphea is divided into five separate groups namely plaque, generalized, bullous, linear, or deep Morphea. The most frequently encountered group is the plaque Morphea. This form is characterized by round or oval shaped lesions that appear hard and shiny. They are mainly present on the trunk or proximal extremities. Bullous Morphea is a rare form and is characterized by bullous lesions surrounded by plaque Morphea. Deep Morphea is typically seen as a single lesion present around the spine. The skin will appear normal, atrophic, or hardened. Patients are usually asymptomatic with no visceral involvement [3].

Generalized morphea is mostly seen in women and affects two or more body sites. They appear inflamed, pigmented, ill-defined, thickened, and may adhere to the fascia or muscle. Flexion contractures of the joints with muscle-joint symptoms are common. Generalized Morphea does not cause Raynaud’s phenomenon as seen with systemic sclerosis. Linear Morphea is commonly seen in children and appears as a linear streak that may involve the dermis, subcutaneous tissue, muscle, and underlying bone. Approximately 40-70% of children who had Morphea was present in the linear form. Lesions may be present in the scalp, extremities, or face. If the bone is involved, this may interfere with normal growth and development of the child. If the scalp is the involved area it may lead to areas of Alopecia.

Approximately 20% of patients with localized scleroderma will develop extra cutaneous manifestations such as arthritis, seizures, or uveitis. Neurological symptoms are the most encountered systemic manifestation presenting as complex partial seizures. Brain changes were identified in approximately 75% of the cases who were evaluated with an MRI. Children may develop limb length discrepancy and joint contractures requiring orthopedic evaluation. Linear scleroderma has an increased prevalence of autoimmune diseases such as diabetes, Hashimoto’s thyroiditis, Grave’s disease, and ulcerative colitis.

There are no acknowledgments or non-financial supports that need to be disclosed.

No conflicts of interest.

There are no funding sources that need to be disclosed.

No approval was needed for this case report.

Full consent was obtained from the patient to write this case report and use the photos to illustrate the diagnosis.