Laparoscopic treatment of intestinal obstruction due to a Littré’s Hernia

Littré’s hernia is a very rare condition characterized by the presence of a Meckel’s diverticulum in a hernia sac. In the 39.6% of cases the site of occurrence is the femoral canal. There is a paucity of literature surrounding the safety and feasibility of emergency laparoscopic surgery for incarcerated Littré’s hernia and, in general, for incarcerated femoral hernias. Moreover the choice between immediate repair of the wall defect during the emergency surgery and elective repair (with or without mesh) of the hernia in a second time depends on many factors and there are not specific indications in literature. We present a case of an 84-years-old female, who presented at the emergency department with a Littré’s hernia incarcerated in the femoral canal conditioning small bowel obstruction. The occlusion was treated with an emergency laparoscopy and the Meckel’s diverticulum was resected. We planned the hernia repair with mesh in elective conditions. The post-operative outcome was uneventful.

Meckel’s diverticulum is the most common congenital anomaly of the gastrointestinal tract. It is usually found on the anti-mesenteric border of the ileum, 20–90 cm from the ileocecal valve. It usually presents no specific symptoms and only around 4% of the patients, having a Meckel’s diverticulum, experience related complications. It is mostly asymptomatic but when symptomatic the most frequent condition in adults are obstruction (14-53%), diverticulitis (12,7-53%), ulceration and perforation. Meckel’s diverticulum in a hernia sac is a very rare condition and it is called Littré’s Hernia [1,2,3]. This disease was first described by Aléxis Littré in 1700. Most Littré’s hernia cases presented in literature regard incarcerated hernias and in the 39.6% of cases the site of occurrence is the femoral canal [4,5]. There is a paucity of literature surrounding the safety and feasibility of laparoscopic repair for acutely incarcerated Littré’s hernia. Scientific literature is even poor of laparoscopic repair of incarcerated femoral hernias.

A 84-years-old woman with a past medical history of arterial hypertension, presented to the Emergency Department of Humanitas Mater Domini Clinical Institute (Italy) with nausea, vomiting and pain for a few days. Physical examination revealed a significant abdominal distension and the presence of a small and fixed swelling in the left groin region. The patient had no fever. Blood tests showed normal WBC count (3200 x mm3) and no significant PCR elevation (2,32 mg/dL). The patient performed a CT scan that showed an intestinal obstruction due to imprisonment of the small bowel in the left femoral canal (Figure 1). There were no radiological signs of intestinal necrosis in the hernia site. An attempt to manually reduce the hernia sac in the Emergency Department was performed without success. Therefore we decided to submit the patient to an urgent surgery with laparoscopic approach. 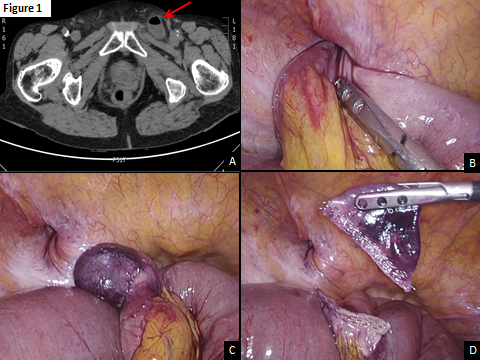 A: The CT scan show a loop in the femoral canal.

B: The loop was gently removed from the femoral canal with laparoscopic approach.

C: A Meckel’s diverticulum with necrotic ischemic suffering was found inside.

D: The Meckel’s diverticulum was resected with an endoscopic linear-stapler.

A supra-umbilical trocar (12 mm) was inserted according to Hasson’s technique and pneumoperitoneum was created. A 12 mm trocar and a 5 mm trocar were inserted under vision in right flank and hypogastrium respectively. The peritoneal exploration confirmed the incarcerated left femoral hernia containing the omentum and a small bowel loop (Figure 1). With delicate tractions the herniated structures were reduced in abdomen, discovering that a Meckel’s diverticulum had been imprisoned in the femoral canal. The diverticulum presented an aspect of necrotic ischemic suffering and it was resected with an endoscopic linear-stapler (Figure 1). In order to avoid the risk of intestinal stenosis, a mechanical lateral-lateral ileal-ileal anastomosis was performed through the supra-umbilical incision, minimally enlarged. We decided to conclude the urgent operation at this step, planning the hernia repair in elective conditions. The patient had not intraoperative and postoperative complications.  On the 5th post-operative the intestinal function restart and the patient was discharged on the 8th post-operative day. The histopathologic exam confirmed a Meckel’s diverticulum with hemorrhagic necrosis. A follow up visit was programmed after a month to decide the following surgical treatment. The patient was in good conditions without other episodes of hernia complication. However she refused the hernia repair surgery at the moment.

Laparoscopic repair of acutely incarcerated abdominal hernias remains controversial even if several studies evaluated this field [6,7,8]. The laparoscopic approach to incarcerated hernias can offer potential advantages: facilitation of bowel reduction from intra-abdominal insufflation and direct visualization of bowel viability. Hernia sac reduction is mandatory in case of incarcerated femoral hernia. This is true even in case of a Littré’s Hernia in the femoral canal. The choice between immediate repair of the femoral hernia (with or without a mesh) during the emergency surgery and elective repair of the abdominal wall defect in a second time depends mainly on the conditions of the incarcerated bowel and, as a consequence, the necessity to perform a bowel resection. Moreover the surgeon should consider the patient’s conditions. Until now definitive indications regarding this item were not published. Atsushi K. at Al.6 in a recent study (totally 112 patients with incarcerated groin hernia), compared emergency hernia repair (76 patients in the emergency group) versus elective hernia repair after emergency reduction (36 patients in the reduction group) concluded that patients who do not request intestinal resection (21 patients underwent intestinal resection) have better outcomes after sac reduction in emergency setting followed by hernia repair in elective conditions. Moreover, Atushi et Al. reported that 15 patients were treated with laparoscopic approach in the reduction group versus 5 patients in the emergency group. In our case we performed a laparoscopic abdominal exploration with hernia reduction and resection of the Meckel’s diverticulum. Moreover a small bowel anastomosis was performed. Because of the necrotic condition of the incarcerated diverticulum, the presence of an intestinal anastomosis and the advanced age of the patient we avoided to perform the hernia repair during the emergency surgery. We planned to perform femoral hernia repair with a mesh reinforcement in a second time in elective conditions in order to reduce the risk of infection. Unfortunately, the patient then changed her mind and chose to refuse hernioplasty.